I write this from a super nice lookin' hostel in the capital of Costa Rica, that apparently used to be the home of the Costa Rican president in the 1940s!

The Costa Rica side of the border also went pretty smoothly! A lot of waiting for people to do things and looking for the right place to go next, but no major road blocks á la El Salvador. The process took us well into the afternoon though, so we had to find a campsite stat! We drove through the evening and ended up camping at a beach access parking lot a couple hours south of the border.

The sunset as we made for the Pacific Ocean

We were awoken bright and early at about 6am by some construction directly next door. Time to go! Our next stop was Nosara, a beach and surf town known to be good for beginners because of some reliable, easy breaks at Playa Guiones. The road in was pretty horrendous, Kelly had to dodge approximately a million potholes along the way, but soon we were there! We planned to hang out there for several days to rest up after all the border crossings from the last few weeks and try our hands at surfing. We decided to sit around for the rest of the day and get a 24 hour surfboard rental the next day so we'd be able to fully take advantage of our time with them. 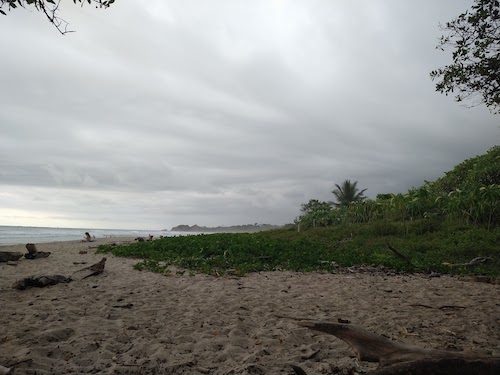 It's been a while, Pacific!

It's finally surf day! We were pretty stoked for it, as we'd been looking forward to trying to learn how to surf from the beginning! We went to the surf shop at around 11 to pick up our boards, and got two intermediate boards. I figured those would be best, as I'd surfed one day in North Carolina last year and grew bored of the boaty beginner board within an hour and had graduated to flailing on a shorter intermediate board. We whisked them away to the beach and quickly dove in. It was pretty bad. These waves were a bit bigger than those back in NC, and we were having a hard time even standing up!

After maybe 30 minutes of mutual struggle, Kelly fell in a wave and her board went flying, coming to a quick halt against her head. I could hear the "clunk" from where I was 100ft away, even over the sound of the surf! I boogie boarded on the very next wave and Kelly wasn't doing so hot, her board had got her good. Luckily our boards had coatings of foam, so at least it didn't break the skin! It had, however, caused her to bite her tongue, so I confirmed that she wasn't missing any bits of tongue and we headed back for the beach.

We hung out under a tree for an hour or two, I grabbed some ice for Kelly's head from a cafe a short walk away. We just sat and watched the world go by, and at some point a wild hermit crab ran by on important crab business! We took up some of his precious time to take some pictures and then set him on his way. He was REALLY fast for being so small. We determined that getting two intermediate boards was a bit optimistic, so I went back to the surf shop and swapped out one of our intermediate boards for a bigger, beginner board so we'd both have a better one to get the hang of it with. When I returned, there wasn't much else I could do to help alleviate Kelly of the throbbing from her head, so I tried surfing again. I was eventually able to stand up pretty well!

At that point I got a bit big for my britches and went out to where the big waves were breaking pretty far back from the rest of the beach, with the big dogs. I bit off way more than I could chew. After a while of sitting around like a bump on a log, trying and failing to catch these massive (to me), 8 foot waves, I tried to make back for shore. I got rolled several times trying to get to where the breaks were smaller, then finally managed to catch one and boogie board it all the way back to solid ground! Apparently Kelly was quite tickled from her vantage point on the beach, as she kept expecting me to stand up... and I never even tried. Surfing is so tiring!

Anyway, we were both either pretty exhausted or in pain, so we checked out from adventurous activities for the day. We checked out some shops in town, which all turned out to be hella expensive. Nosara is a pretty kitchy, tourist town that caters to a lot of wealthy tourists, and the prices showed! We did, however, snag some Birkenstocks as a belated birthday present for Kelly, and a pair of silver hoop earrings as Kelly had discovered she lost her old piercing in the waves. 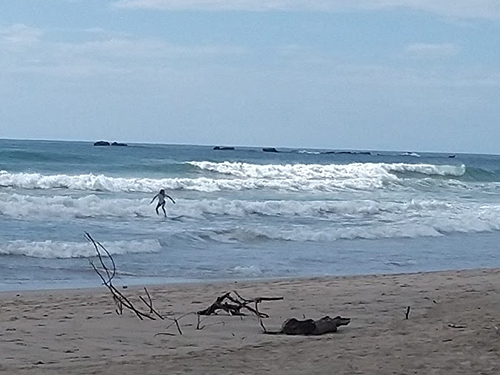 Ya boi catching a wave! 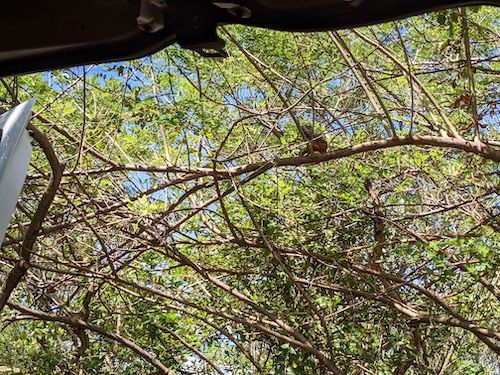 A neat red squirrel as seen from inside the van at our campsite. We also saw several iguanas, lizards, and a snake in those branches! 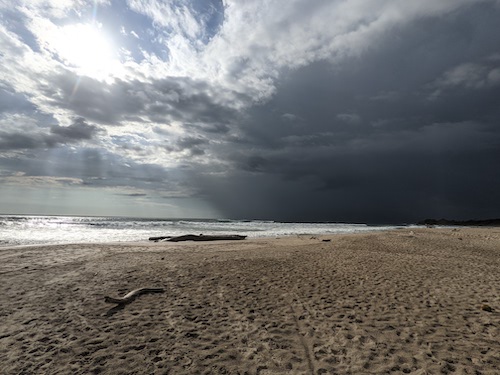 Playa Guiones during one of the brief afternoon showers 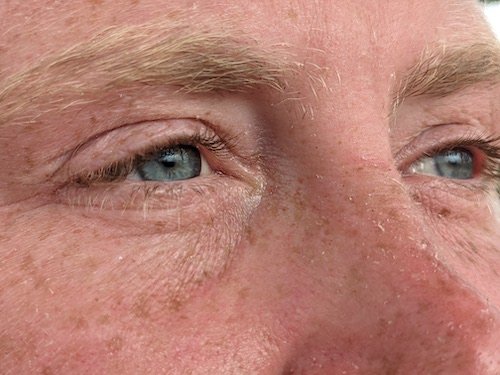 Kelly's eyes with the 2x zoom on my pixel 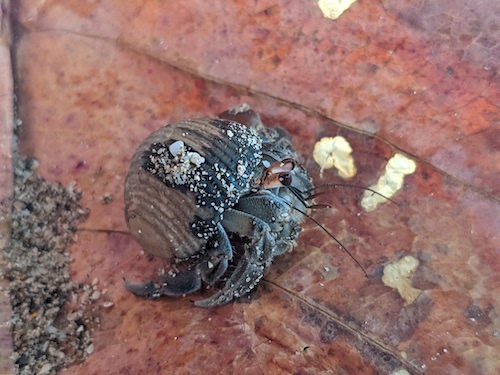 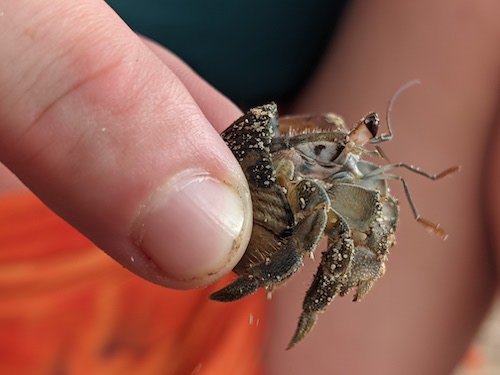 A pretty uneventful day, I suppose! We tried some more surfing since we still had the boards for the morning and Kelly's head was starting to feel better. She ended up with a huge goose-egg on her head! We concluded that we did indeed have surfers deep inside of us, but it would take some work to dig them out. We were both finally able to stand up pretty reliably towards the end of our session that morning! 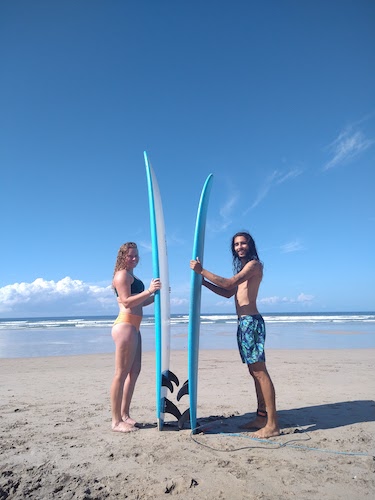 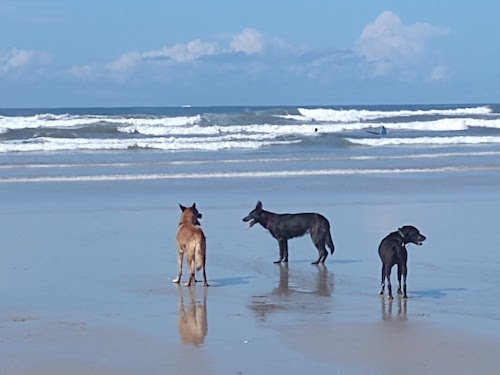 A pack of dogs that would run and play in the surf together! We also saw them looking for crabs in a puddle just behind the beach.

After returning our boards we finally admitted our time at Nosara hadn't been quite as restful as we'd hoped. In fact, we were feeling more drained than we did when we had arrived. A mixture of the heat, running out of clean clothes and having nowhere to wash them, being sandy with no good shower around, and Kelly being clocked on the head with her board, we didn't have much that might allow us to restock our energy stores. We decided to make for higher, cooler ground!

We waffled around in Nosara for a few more hours, then skedaddled to the cheapest hotel around that we could find, which was pretty far off the beaten path, but luckily on the way to San Jose, our next stop! The owner of the hotel and a fresh employee (a girl in her late teens or early twenties fresh from Germany the day before), seemed very interested to chat, but Kelly and I were so exhausted from the last few days we just hid in the room for the evening and following morning. Aww yeah.

Mostly a driving day. We went to a hostel in the capital of San Jose that came highly recommended on iOverlander, and it lived up to the hype! The place was super nice looking inside (it turns out to have been owned and lived in by the Costa Rican president in the 1940s), offered free breakfast in the mornings, and we could camp cheaply in their parking area! Win win. 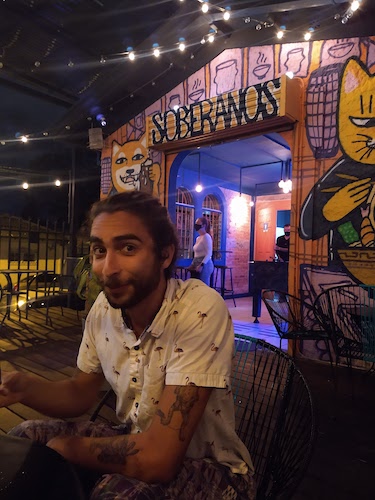 Date night at a brewery down the street 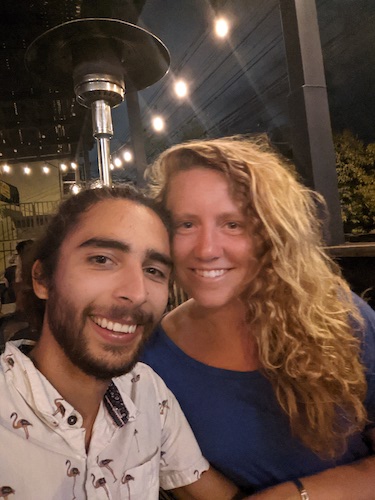 They even had laundry services at the hostel, so we finally had clean clothes again.

We ended up deciding to take a few days here to actually rest up, where hanging out in Savannah didn't make us feel like we were wallowing in our own sweat and dirtiness, we could shower thoroughly and have a real kitchen at our disposal! The one downside: the resident kinda weird old person at the hostel was extra weird. He was a retiree from New York getting ready to settle in Costa Rica for his retirement, and he had a penchant for capturing you into conversation when you clearly have something you're doing and are not interested in talking. Also he holds up the New Yorker stereotype of being loud. That meant we sadly had to either hide in Savannah (not the worst situation, we could have the doors open directly to some jungley plants and still feel pretty private), or head to a coffee shop for a change of scenery, or he would find us and talk at us no matter what we were doing. Hostel life!

Kelly only had one piercing that needed another piece of jewelry, so we planned to swap my helix piercing for the hoop! I've had it for about a year and a half now, and it's still healing up. They look great, but god is the healing process hard. I also have a nostril piercing I'd been looking forward to getting a ring into for a long time, and it's about 8 months healed. I figured I could go to a shop and get the spare hoop Kelly got into my ear, and buy a ring for my nostril and finally have my final piercing form! That process was super easy at Stattoos in San Jose! They had quite an operation going, there were tons of tattoo and piercing artists there, and I was in and out with my new jewelry in 30 minutes at most! I could never have swapped them out myself, so I was super glad to have such a nice place. The piercer I worked with also spoke english, which made it really easy to work out what I wanted. Anyway, I put all that info in a Google review so I don't know why I'm writing it here too, I guess if you're in San Jose and want a tattoo or piercing, go to these guys! 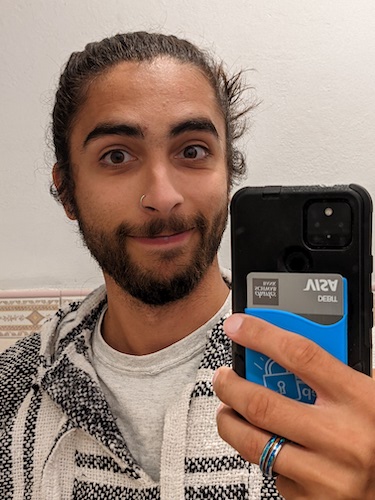 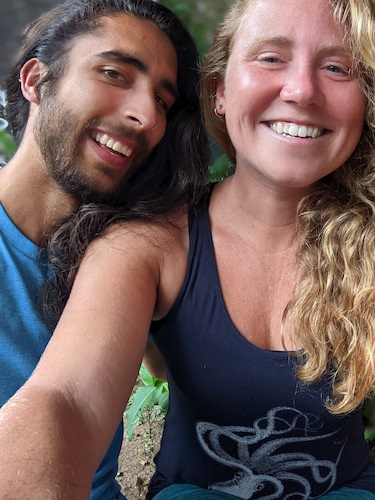 Showing off our matching new bling!

The days are starting to blend together to be honest, we're not doing a ton. Our days consist of watching Schitt's Creek (we finally finished!), planning on our computers for days, adventures, and trials to come, and playing card games. We need the break, but it's starting to make us weird.

Just kidding, don't send help, our minds are just going crazy while we give our bodies a rest!

(I know I'm posting this on the 24th and this section applies to the 25th, but the above is also our plan for the 25th, haha. If anything crazy happens, though, I'll be sure to mention it in the next post!

We try our hands at surfing (quite a tragedy, to be honest), buy some stuff, and I finally get a ring in my face!