I'm writing from a pretty nice truck stop in Panama while watching thick rain come down in the parking lot from a 10ft window.

We actually had a pretty damn fun day on Thursday! First thing after breakfast we walked to a butterfly garden a few kilometers away from the hostel. It had a super pretty aerial studio with silks and lyra rigged with beautiful windows overlooking lush foliage. And, interestingly enough, a climbing harness with ascending gear hanging from the wall! We suspect it's for a teacher to get on level with a student on an apparatus, but there wasn't a class going on so we couldn't quite tell.

There were all local butterfly species in the relatively small butterfly garden, I'll let the pictures speak for themselves! 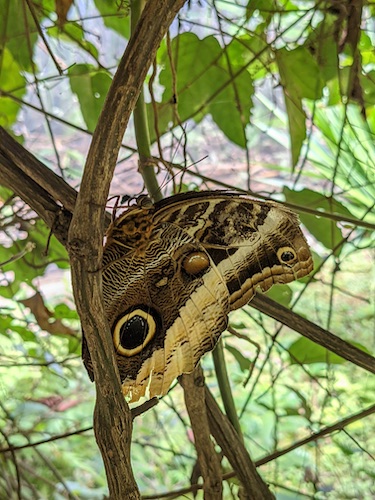 These big guys were all over! 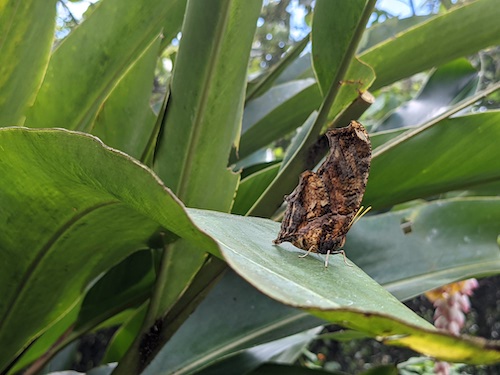 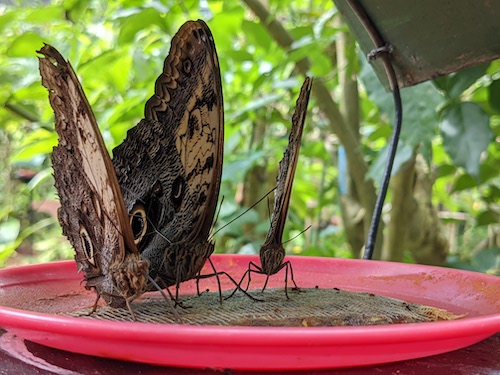 This squad was getting ready to drop a sick beat 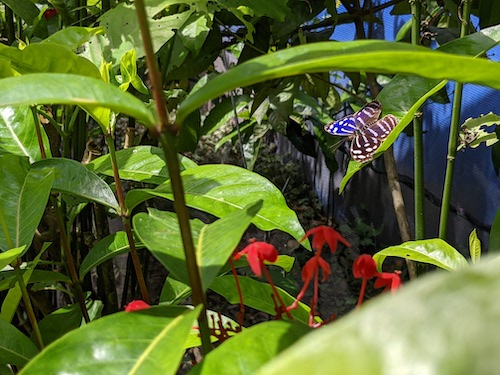 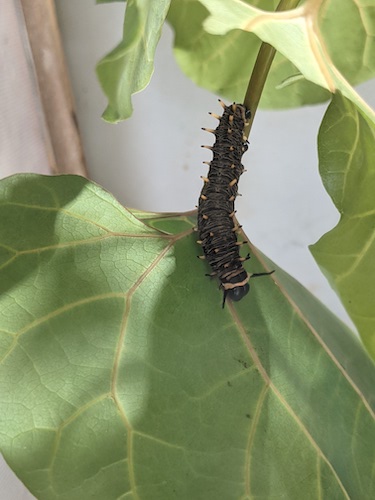 Nature is amazing! ... but also eww 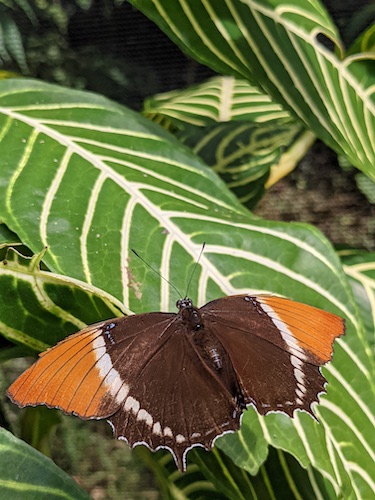 This guy let me get super close before flying off 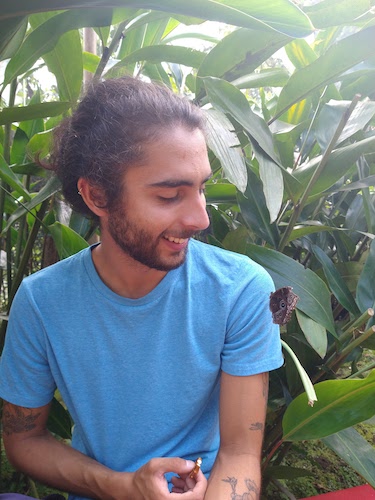 The butterfly gardens also had trails behind the gardens that led down to a river (from our walk we deduced that the river also formed a natural border between a nice part of town and a bad part of town), so of course we had to do it. The trail was pretty steep down a large jungley hill to the river, which bordered the San Jose zoo on the other side! We got to see some monkeys for free, suck on that San Jose zoo. 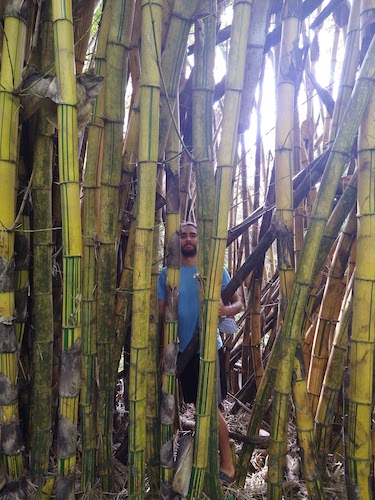 A copse of bamboo near the river 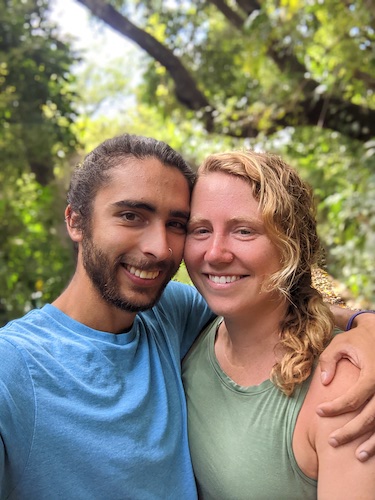 We're getting better at selfies?

After wringing the butterfly garden dry of things to do and see, we headed back to the hostel, making it a loop! On the way we saw this super adorable grafitti heart. This was actually the second one we'd seen, but knowing now that they are scattered around San Jose, I HAD to start documenting them! I Only found two, but here they are! 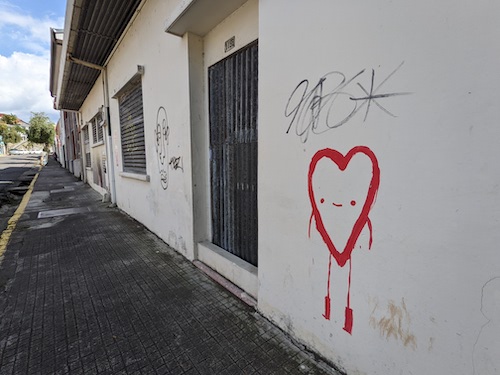 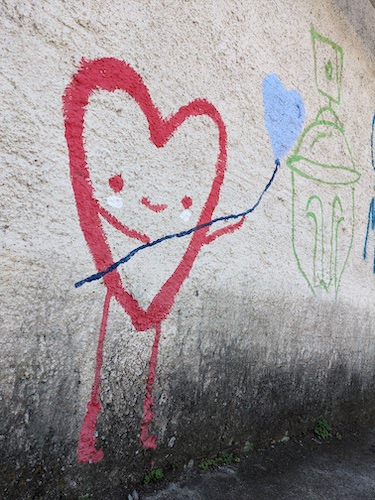 San Jose, if I come back, I am going to walk every single damn street in search for these adorable grafitti hearts.

Anyway, once we got back to the hostel, we just kicked it and played competitive solitaire (it's just regular solitaire but you share the ace piles). God it's tiring, but a ton of fun! Kelly kicks my butt, but I'm slowly starting to get the hang of it. 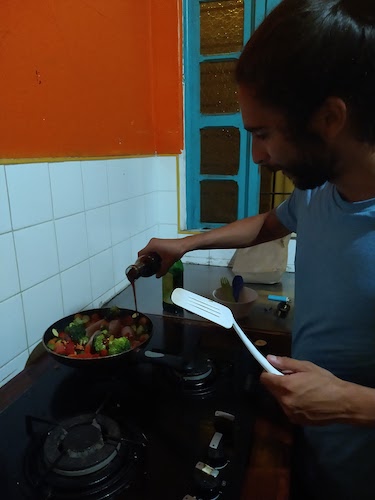 Also, we made stir fry for thanksgiving dinner!

After spending almost a week in San Jose, it was about time we scrammed. As we were getting ourselves together to leave, the american retiree briefly trapped us in conversation again. It turns out his phone had been stolen from his room! He had been sleeping in his room, and a woman had just walked into the hostel off the street, then into his room, and sat down at the foot of his bed. He awoke with her sitting there, and, reasonably, freaked out a bit. Apparently she asked if there was anything she could "do" (wink wink nudge nudge) for him, but he said no and got the hell out. In his rush to leave he left his phone on the dresser or nightstand and when he came back for it later the woman and the phone were both just gone.

Wowee. We got to hear plenty about how he had to fly back to the US immediately to get another phone, since there was no way for him to do business in Costa Rica without a US phone. Eventually he left to go to the police station to file a report and we were able to get outta there!

We were making for San Gerardo De Rivas, a town at the foot of Chirripo National Park. There's a pretty cool 130ft tower in the alpine in the park we were hoping to do, but they don't allow tent camping and have a permit system for access that makes very little sense on how to actually get the permit. We figured we would just head over and see what we could do by talking to someone at the main office, as we were getting nowhere on their website or by emailing.

The road we took to get there, highway 2, was STUNNING. It snaked its way through the mountains, eventually following a ridge before descending into a valley to San Isidro de El General. It was easily the most beautiful road we'd been on yet!! 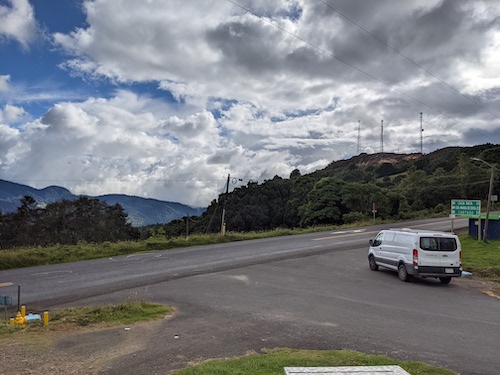 Stopping to fill up on drinking water 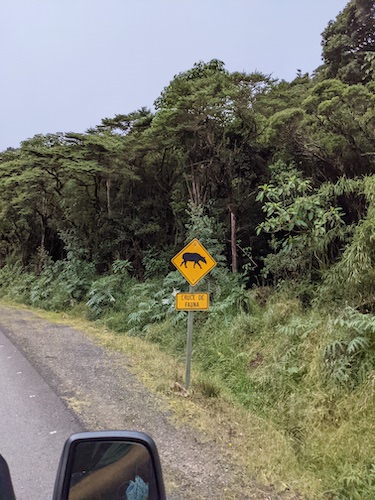 Man, what we would give to see one of these guys casually crossing the street 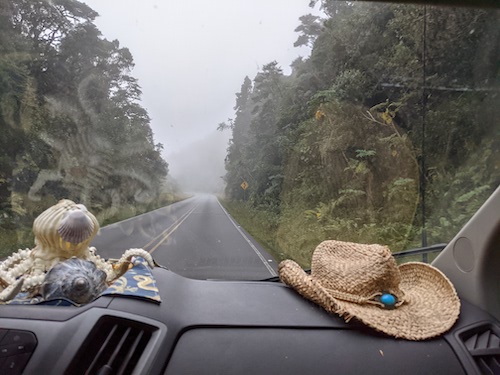 We were up in intermittent clouds at about 10,000ft for much of the drive!

We made it to our campsite, a road around a soccer field, maybe a half hour before dark. The road to get there was pretty thin and winding, and locals would fly around corners with reckless abandon! We were both pretty stoked to park and know we'd be staying there for a couple nights, so we wouldn't have to worry about driving for a bit. 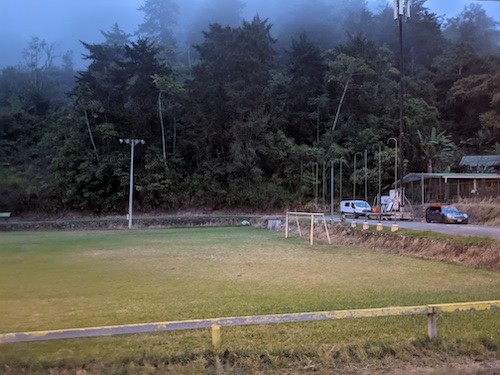 We were pretty stoked to try Chirripo National Park, we'd read it's some of the most beautiful trekking around, and one of the top things to do in Costa Rica! We walked a couple kilometers down the road to the park office. Turns out you can't book tickets same day. Also there are no tickets available tomorrow, they only let 20 people into the park per day.

The park official, who was actually super chill and nice, he was merely the bearer of bad news, recommended we hike the trail that leads to Chirripo, then hang a left just before the park entrance, where we would need our tickets, to go to Cloudbridge Reserve, which has several waterfalls!

Can't win 'em all, I suppose. We decided that was definitely better than nothing, so we walked back up to Savannah, packed for a day hike, and headed off! We'd read that the road leading to the trailhead got pretty steep, thin, and bad, so we just walked it. It was indeed, steep, thin, and bad!

On the way up we passed by several farms, and made friends with a young cow! It seemed too old to be a calf but also too young to be a grown up cow. Anyway, he was sipping away at a small creek near the fence and we couldn't help but try to pet him. He was pretty curious about us, and even licked our hands! I felt like such a tourist but playing with the cow was so cute. 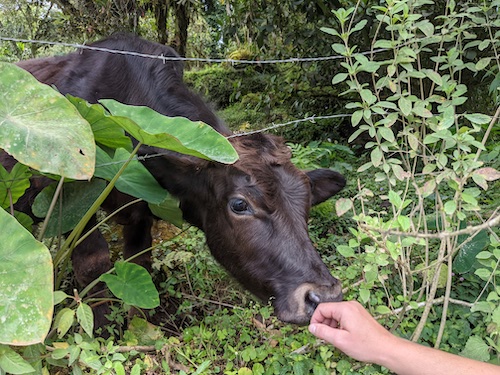 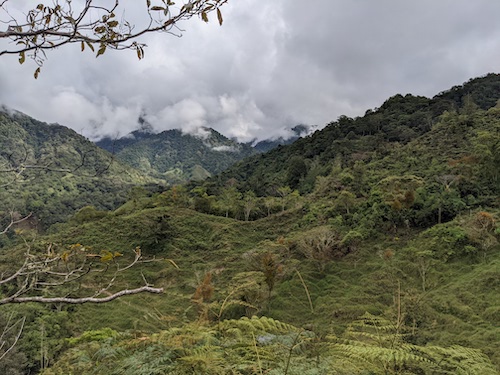 The views on the way up were stunning 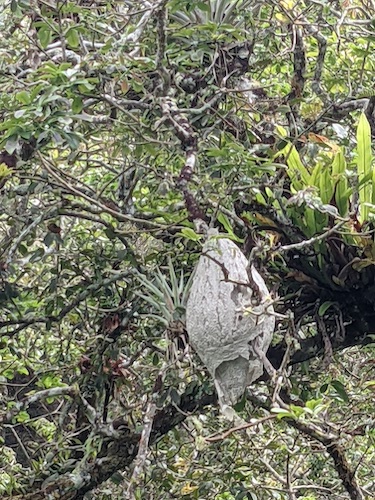 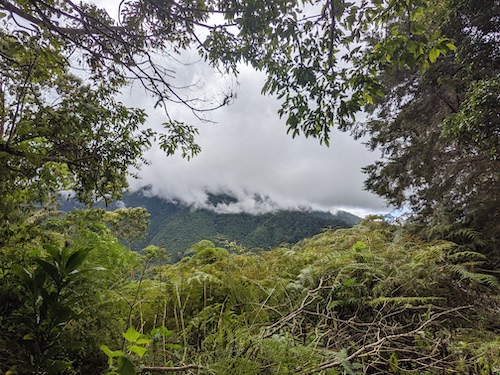 Occasionally the jungle would open up into almost a window 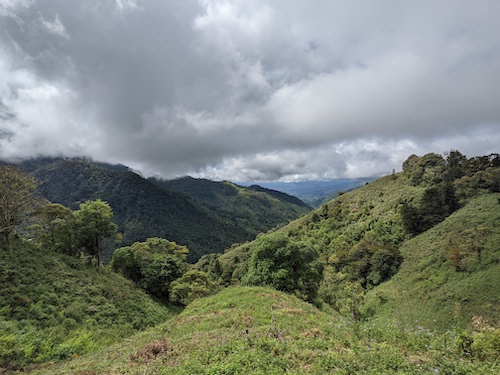 Looking out towards the foothills

After going uphill pretty much continuously for about three miles, we made the left turn towards Cloudbridge Reserve... and promptly went on a 1,500ft downhill over one mile. Ah well, we definitely got a good workout! The waterfalls in the reserve definitely lived up to the hype, they were lively and crystal clear! 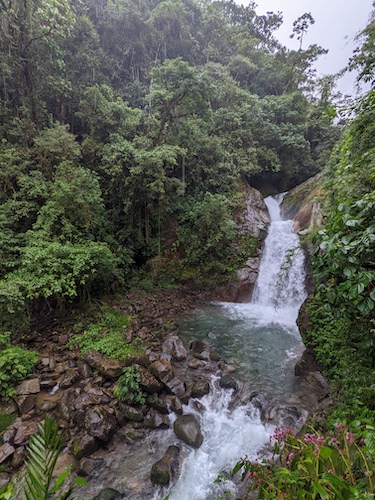 We encountered the first waterfall during a brief afternoon shower 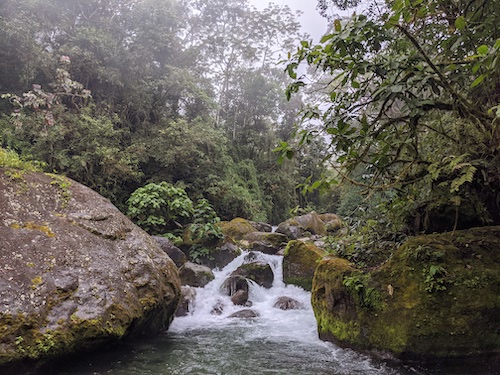 The second waterfall was a bit more lowkey

We kept hiking, until we came across a PERFECT section of river for a dip. It seems weird to describe swimming in a river in the jungles of Costa Rica a polar plunge... but holy shit it was cold. We could only stay in for a minute or two, and could only stand to go under twice, but the water was so refreshing! It made us feel cleaner than any shower had in the last few weeks! 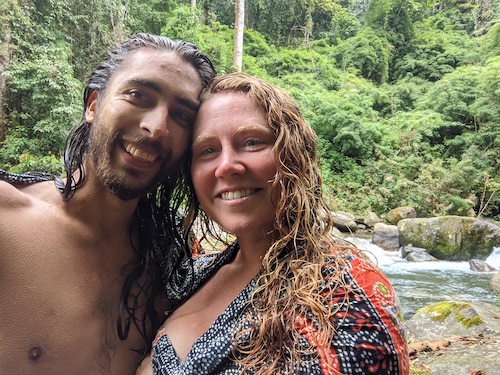 After drying off, we figured it was time we headed back. The hike back didn't let up on the views either! 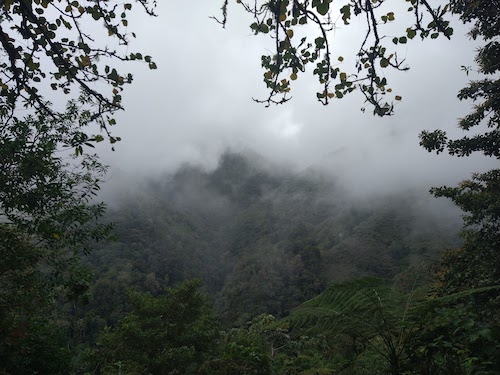 The mist was coming and going all day 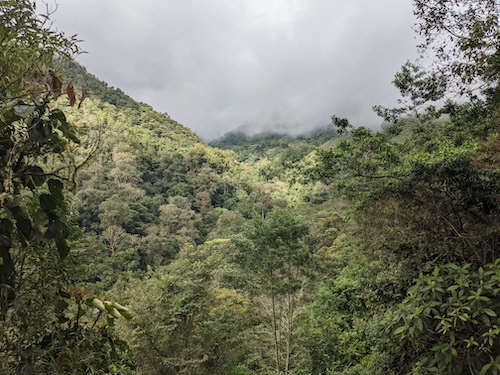 During transitions from sunny to misty, it made for some seriously beautiful dappled light

Here's a map of our hike! It was the perfect length and difficulty to feel like a rest day activity. We're worked enough to feel like we accomplished something, but not so worked that we're exhausted. The sweet spot. Click the link to see more stats if you care!

After getting back to camp we decided we'd earned a tasty dinner, so we snagged a pizza at one of the only restaurants in town. Turns out it doubles as a birding area, so we got to see a lot of birds birding about! This was one of the bigger birds we saw, and by far the most still. Hence he's the only one we got pictures of. 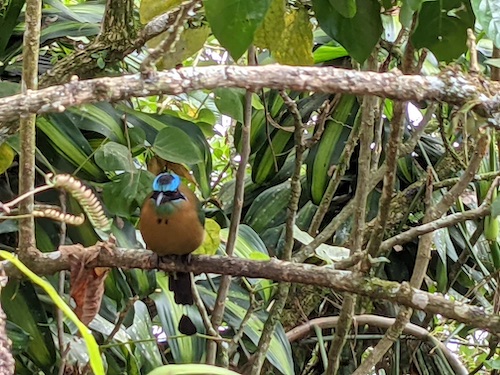 Looks a bit grumpy, don't he?

One pizza, several games of spit, and a horror movie later, we hit the sack.

The only thing memorable about the day ended up being the hotel we picked out for the night. We stopped at a coffee shop in San Isidro de El General to plan a bit for entering Panama, then drove most of the rest of the day. At the coffee shop, our main goal was to get our heads on straight after being in the mountains. For a long time our plan had been to visit one of my friends from years ago in Durham the night before crossing to Panama, but we quickly realized that time had gotten away from us and we needed to get into Panama stat! Cursed months ending sooner than you think they will, I tell ya'. I regretfully informed my friend that we goofed, and we'd have to zoom through the rest of Costa Rica. We'll be back, though!! We're not even close to done with Costa Rica.

I picked out what seemed to be a lowkey hotel close to the border so we would have room to throw documents everywhere while organizing them. I would classify it as an awful mistake, but we really had no warning for our night to come.

We had a crackhead smashing bottles in the street outside our room at midnight, motorbikes blasting down the same road now and then, and eventually we realized there were tiny bugs crawling on us, most likely from the throw blanket.

We ended up taking thorough showers at 3am then dove into Savannah in the hopes of getting a few winks. Oh yeah, AND we had been hoping for WiFi to aid in our planning and hopefully to stream a movie... but the WiFi wouldn't work literally just in the room. It worked outside the door, it worked while inside Savannah, it worked at the front desk when I asked for help. Ohhhh my god I still get a little mad thinking about it now, what a bust.

Another border crossing day! Obviously, we were up bright and early. We snagged some sodas to keep our energy levels up, got a few more copies in town to cover our bases, and made for the border to Panama.

The exit procedures for Costa Rica were pretty easy, just some walking back and forth across a 2 lane highway, standing around in front of immigration windows, and we were rolling towards Panama!

We check out a butterfly garden in San Jose, drive arguably the most beautiful road in Costa Rica, go for a long hike in Cloudbridge Reserve at the foot of Chirripo National Park, then blast for Panama!