I write this post from a very cute hostel in Antigua, Guatemala with green trees and lush plants all over the place, sitting at one of the few chairs with an outlet nearby that has a too thin cushion.

Crossing into Guatemala was a little hectic, but made very easy by enterprising currency exchangers hanging around the government buildings just past the border. We were basically assigned this 12 year old boy who helped us through the process, going so far as to walk us 1km into town to the bank to pay our Temporary Importation Permit for Savannah! We tipped him nicely, his presence alone made for one of the most stress free border crossings we'd had yet(Closely followed by the Mexico - Belize border).

After getting everything squared away at the border, we were off! We drove about 3 hours or so, we were both super exhausted from the border crossing. We'd also just taken doxy (preventative medicine for malaria, which is present on and off south of Belize) for the first time the night before, whigh really got our goats. In light of our energy levels, we decided to stop early in Sayaxché at a place that came highly recommended in iOverlander. It turns out the river you have to cross just before Sayaxché has no bridge, instead a ferry that's basically a floating platform they ram into each shore! Nuts! 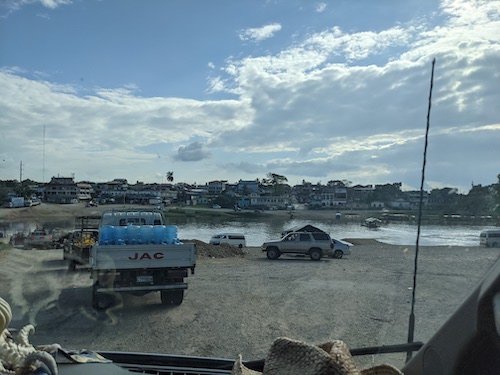 Our first view of Sayaxché 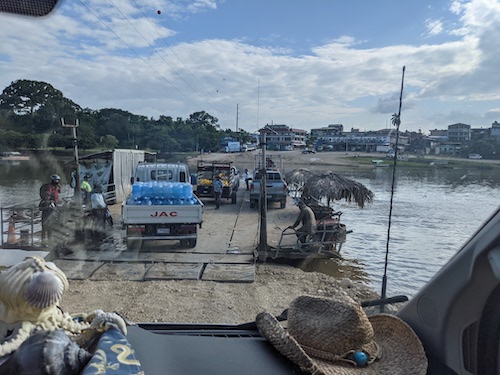 It took a bit of work to find the place we planned to stay, but we pulled it off just a few hours before nightfall. We took a quick walk around town to check it out before succumbing to our hunger and finding a restaurant. This one pizza joint (I know, lame, but the doxy had our stomachs in knots all day so we were playing it safe) seemed like an excellent bet until.... 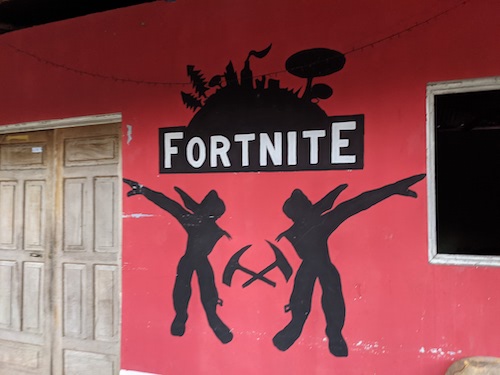 We almost turned around right there

But we stayed and had some pizza, which was quite good!

The day dawned beautifully, we drove off towards San Cristobal Verapaz, the hometown of a family friend of my childhood! When I was about 11 or so, my family hosted Nancy, a student from Guatemala, as she went to school in the US. She stayed with us for a total of several years in two stints. She made a big impression, I was excited to see her again, Kelly was excited to meet her, and we were both excited to see her home! However, about an hour into our drive there we drove into a pothole that had been covered by a leafy branch. This wasn't just any pothole, it was just a bit bigger than a tire and about 3 feet deep! Savannah's entire right driverside tire was suspended in mid-air inside this pothole, the frame just in front of the tire resting on the pavement on the other side of the pothole. 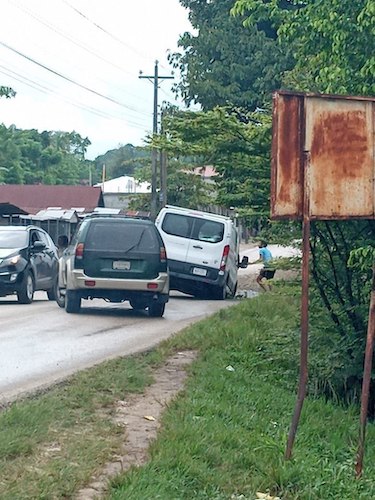 Me observing the situation

Within about a minute and a half 8 locals had crowded around and come up with a plan! Kelly put Savannah in reverse and backed up while all the locals and I pushed up on the corner that had fallen into the hole. We were free just minutes after the ordeal began! We stopped at the next gas station to check for any damage and Savannah only has a chip in her tooth where the frame busted through the bumper where it hit the pavement. Lucky!!

From there we had a pretty uneventful drive save for some gorgeous, moody views! 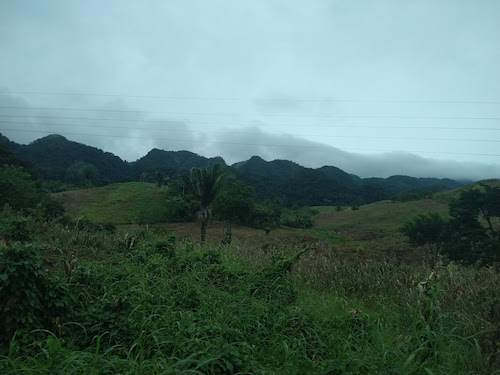 Turns out Guatemala is pretty hilly

Finding Nancy turned out to be a bit of an adventure in and of itself, as Guatemala doesn't super do addresses. We were able to blunder our ways together through a series of lucky guesses and good descriptions of the city! Nancy worked out parking for us in the fenced in side yard of a seemingly random woman with a dog who really didn't like men, making my presence there interesting. But we got Savannah checked in and went to Nancy's house to hang out, meet her sister and niece, and have some authentic Guatemalan food, churrasco! It was really nice to catch up with Nancy and hear about what's been going on in her life after not having seen her in almost 10 years!

Me and Kelly with Nancy's sister, niece, and their dog 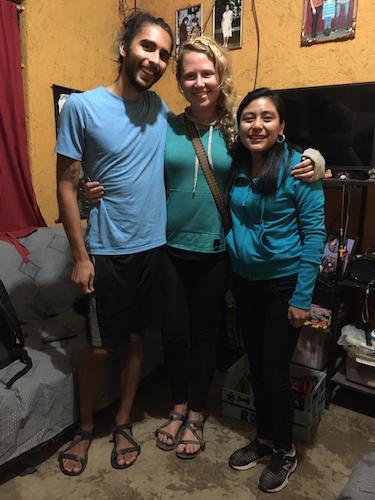 Me and Kelly with Nancy 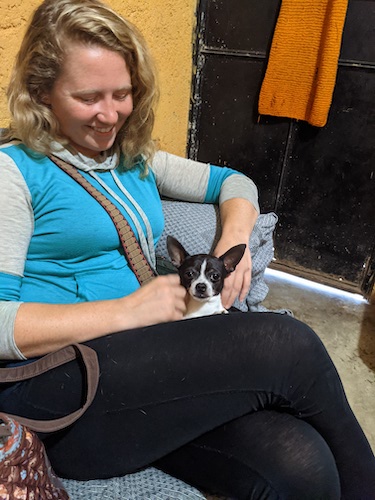 Kelly with the pup, photo taken during a brief lull in the action. That dog was like a little ball of energy!

She told us some hot local news: Apparently locals are protesting an illegal mine nearby by blocking an essential road between where we were and Guatemala City (where we were going next) from 6am to 6pm, and were likely to continue doing so for the next three days!! That would put a serious wrench in our plans. We studied the map and figured we would have to get up at 4:30am to make it beyond the blocking point before they set it up. Wowee.

We went back to Savannah a little early so we could get some sleep before our early morning the next day, but we had to shuffle Savannah around to accomodate some more tennants in front of us so we would be able to leave before the crack of dawn. Funnily enough, one of them turned out to have been behind us earlier in the day when we had gotten stuck in the pothole, which is where the photo of that incedent came from! I chatted with him briefly and he sent me the photo over WhatsApp. ¡Que suerte! We hit the sack for our early morning.

We got up stupid early at 4:30am and Nancy and her sister came by to say farewell (despite our assurances that they didn't need to!). I got mildly harassed by the sexist dog while guiding Kelly out of the gate, we said our goodbyes and thanks to Nancy and her sister, then headed for Antigua! On our way we discussed insurance, which we had read was optional in Guatemala. We'd learned from the last few days that drivers in Guatemala are absolutely insane, it's every man for himself out here, and Kelly was worried that something might happen. We made a pitstop in Guatemala City at an insurance office to try to get something set up. We even read that you could buy insurance in Guatemala that was good in El Salvador and Honduras, which could kill 3 birds with one stone!

It turns out car insurance in Guatemala is not super helpful in the first place, and/or is unattainable anyway. The agent we went to said he couldn't insure a car without Guatemala plates, and he referred us to a different company. We looked up the company and read some things from other overlanders and we concluded that the insurance has such a low coverage that it's basically worthless anyway... so we had one wasted, stressful pitstop in Guatemala City. But at least we saw Guatemala City, where the drivers are two times as crazy as elsewhere in Guatemala! We got the fuck out for Antigua as fast as we could.

We made it to the hostel with a decent amount of time to laze around and rest since we'd been up and workin' so early, and it turned out to be a super beautiful place to hang out and rest!

A planning and busywork day. We both had a lot of life stuff to catch up on and meetings pretty much all morning. Antigua lies in the shadow of a couple volcanoes, one of which erupts roughly every 5-10 minutes!! We snagged a table at the hostel with a great view of the active volcano through the garden... Next up, climbing the dormant volcano a mile away from the active one! 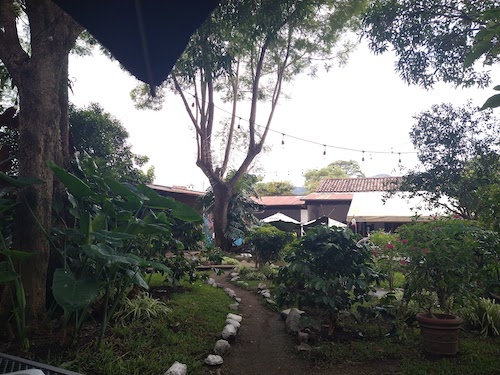 The garden at the hostel

We drive a lot, get briefly very stuck in a cavernous pothole, see a family friend in her hometown, narrowly avoid getting trapped in said hometown by protesters closing the road, have an adventure with insurance, then finally settle in to Antigua, the former capital of Guatemala.