I write this from a brewery a couple hundred miles south of the border in the Baja Peninsula while sipping at my fourth beer (forgive any typos). Today has felt more like 3 days.

Last night, October 1st, we crossed the border in Tecate at around 8:30pm. It was a painless process. Too painless.

There was no one in line when we arrived at the border. We went through the lane, got our picture snapped, and were waved into a parking space by a border agent. It was an interesting vibe, there were about 8 to 10 border agents/military personnel clad in armor and automatic weapons slung about their shoulders just milling about.

The agent who waved us into a parking space asked to inspect Savannah, and Kelly told him he could open the back (luckily he spoke English). He did opened one of the back doors, then shut them shortly after (probably the sight of a bright orange penny board and lime green longboard was evidence enough that we weren't smugglers). He came back around to the drivers side and told Kelly we were good to go, so she geared Savannah up and we were off into Tecate, Mexico!

We were immediately greeted with an intensely Central American experience, far different from our time in Tucson a few days prior. Traffic laws seemed to be somewhat optional, and the architecture was far more packed together and relied heavily on cement. Sadly I did not get any pictures, we were a little preoccupied at that time.

The campsite we had chosen from iOverlander was in front of a few restaurants, and reportedly safer than several other nearby options. As it turns out, one of the restaurants was actually a club that was blasting Friday night music.

After we settled in, we discussed the ease with which we were able to cross the border. After doing a bit of googling, we discovered we needed to get a stamp on a form in order to get another form when we take a ferry from the Baja Peninsula to the mainland. We figured out that we would have to go to an immigration office in the morning to get that taken care of. With that realization, we resolved to settle in to sleep and tackle that problem in tomorrow.

We tried to put up with the intense bass from the club for about an hour until we decided we wouldn't get a wink of sleep and we moved on to another spot ten minutes away.

As it turns out, everyone likes to party on a Friday night in Mexico, as our next spot was a block away from a rockin' house party. Luckily we were a little further away, but they were still blasting music until 2am.

And so off we went, back to the border!

I'll spare the details, but we wandered about the Mexican border area at the command of several border agents, then waited in a waiting room for 45 minutes for the immigration officer to show up in his office to stamp our forms, which he got worked out in about 10 minutes.

From there, we had to get some cash. That saga had already been going on for over a week as we had been working on getting a joint checking account opened with a bank that would refund all ATM charges world-wide at the end of each month. However, we have been having a bear of a time getting the thing to actually work.

Once again, I'll spare the boring details, but as of the writing of this post we're still on the phone with the bank trying to get it worked out so we can actually use the card, and we spent several hours on that morning working on the issue, with the resolution being to call back on Monday.

We finally got some food in us at around 11am, then hit the road south. Our plan was to beeline along Highway 3 to El Sauzal to hit the Pacific Ocean, then hang out there for a bit and decompress after a wild morning. Well, an hour and a half later, we hit El Sauzal, and it turns out it was a shipping town with beaches made out of fridge size rocks. Not quite the tropical paradise we'd been imagining. 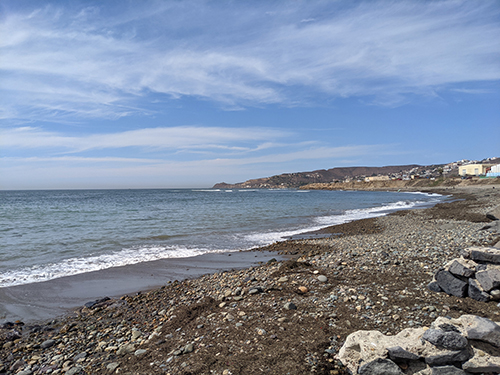 Our first Pacific beach of the trip!

After hanging around the beach for about 15 minutes and splishing our feet in the Pacific, we pivoted and decided to shoot to the east side of the peninsula where the beaches were reportedly nicer, and closer to where our first destination is, a beautiful hot springs! 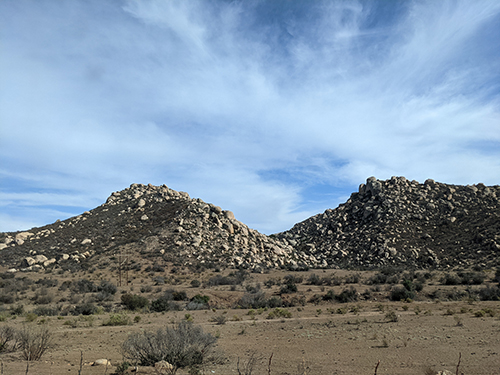 Classic views along our drive on the Baja Peninsula.

Four hours after leaving El Sauzal, we made stopped at a brewery just outside of San Felipe to regroup.

After sipping for a beer for about 5 minutes we both collectively decided we would try to stay the night in the parking area for the brewery, we were both so beat from the day. 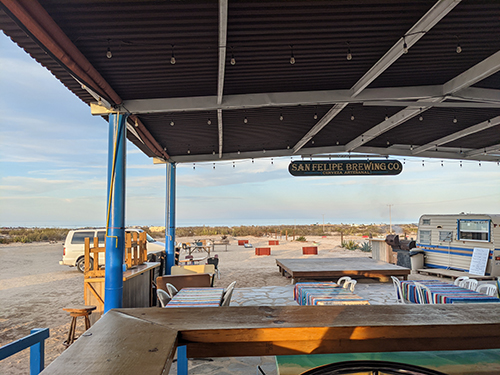 Where we posted up for the evening.

We spent the rest of the day sipping at beers and planning out the rest of our time on the peninsula, details for the ferry to the mainland, and our respective website posts.

At around 8:45pm, a tipsy woman named Nicole came to the outside seating to have a smoke and chatted us up a bit. Kelly's hair looks good down, she wants to buy Savannah for $21,000 or $75,000 and not a penny more, we're both roughly the ages of her children, and I know the punchline to her go-to crusty bus station joke.

The Mexican border agents were wack, the beach on the west coast of the Baja Peninsula is a little lame, and we did a lot of driving.

If there's something I wrote too little about, make a comment and ask to hear more, I'd love to answer any questions!