I write this while melting into a pile of sweat inside Savannah at Playa Tecolote near La Paz.

We woke up bright and early at the brewery, October 3rd, long before they would open. That made it pretty easy to cruise on out, snag some gas, and hit the road.

We have a map with places of interest (in a future update I'll likely have that added to the trip homepage, if it's not already up by the time you read this), and next up today was a hot springs on the coast! People have reported that the experience varies greatly depending on the tide. Too low and they're scorching hot, but too high and you don't get much hot springs at all.

When we arrived the tide was coming in, and we were able to find some warm spots, but there were a handful of other people there we didn't feel up to socializing with, so we kept to ourselves on the outskirts and splashed around the volcanic rock moving from warm spot to warm spot as the tide rose.

We were ready to move on after a couple hours, so we made a couple sandwiches and hit the road once again!

Our campsite for the night was in Bahiá De Los Angeles at a beach called La Gringa. As we hit the town, we decided to re-up on gas since we were running low, but it turns out they were only taking cash. We had yet to figure out our bank card yet, so we were pretty low on cash. After a nerve wracking 10 minutes sitting around with a full tank we weren't sure we would be able to pay for, the clerk came back and told us his internet was back up so he could take a card after all. Thank fuck.

We finally hit the town, where the only source of internet was paying for an hour internet token from the local market, as there was no cell signal. We caught up on our online lives and figured out our plan for the next day before hitting La Gringa, where we splashed around and in the water before making dinner from our hammocks in a delapidated old shack.

That night, just before hitting the sack, we got to play with the bioluminescent plankton in the water, which was a real treat! 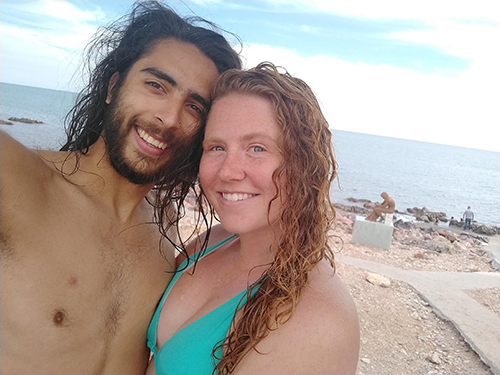 Me and Kelly at the hot springs 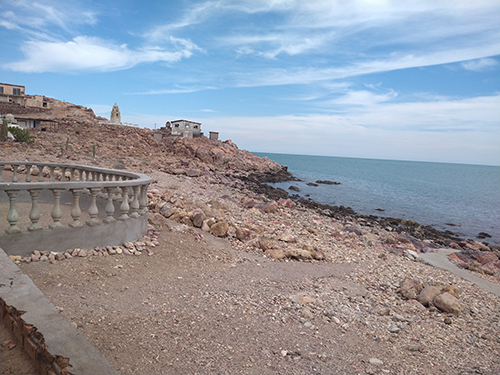 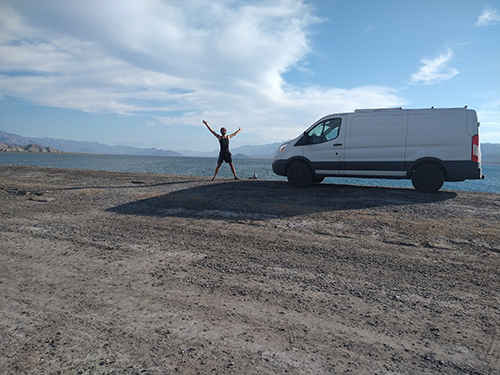 Me just after arriving at La Gringa 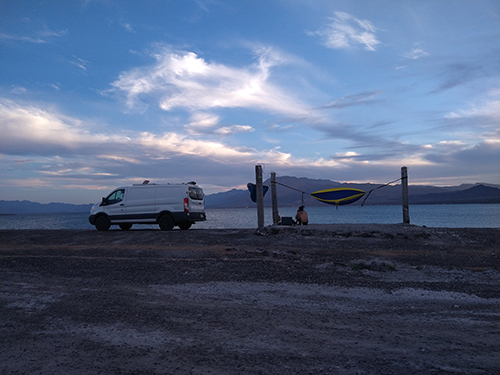 Me cooking dinner at La Gringa

The next morning, Friday (October 4th), was meeting day. Kelly had a meeting with someone she used to work with regarding future opportunities in South America, and I had a lab meeting just after hers.

The market wifi did okay for our meetings, but the true story lies in our time waiting for our respective meeting times.

While waiting for me to return from the bathroom, Kelly was flirted with by a member of the Mexican military (a story for her to tell if she wishes), and we both witnessed a stray dog that had been very friendly towrads us apparently randomly attack a delivery driver for the market. One moment we were chilling at a picnic table with this dog near our feet, then the dog is biting this guys ankle, then the guy is beating at the dog with an empty tray. The dog retreated to literally under our seats while we frantically picked up our legs to on top of the seat to avoid the biting and growling stray and the swings from the delivery driver. We swore up and down he wasn't our dog and the driver warned us that he bites, so we kept our distance from the stray from the on (shocker, right?).

After our meetings were over, we headed to our next campsite halfway from Bahiá de Los Angeles and La Paz (where we plan to get a ferry to the mainland) at a salt flat!

The salt flat was as beautiful as was reported on iOverlander, and we had fun checking out the ancient shells, exploring the barren flats, and playing with astrophotography on my Pixel 4a after the sun set. 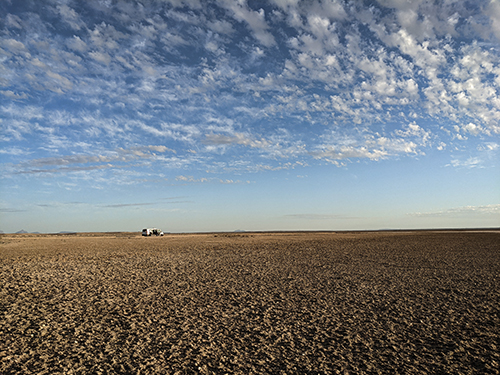 Our camp at the salt flats 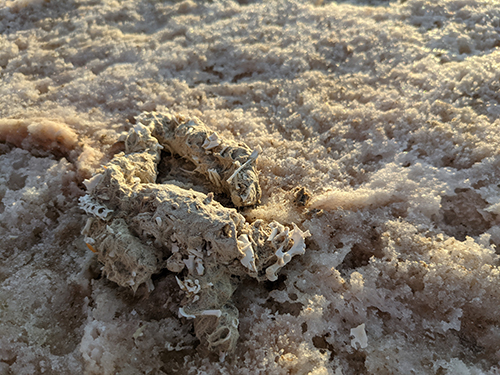 Some very dehydrated scat on the salt flats. Them bones! 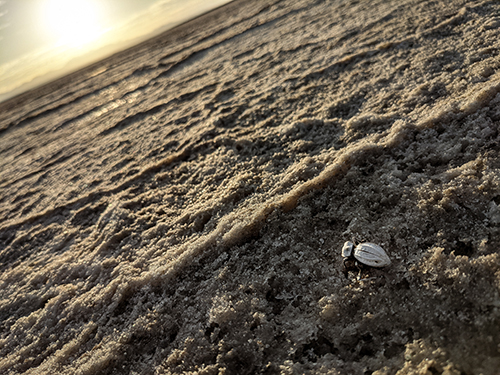 A very dehydrated dead bug on the salt flats 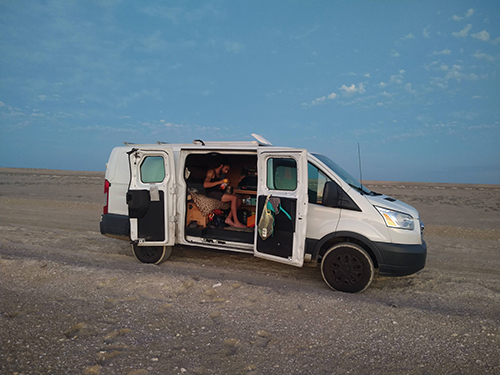 Me doing some chores at camp on the salt flats 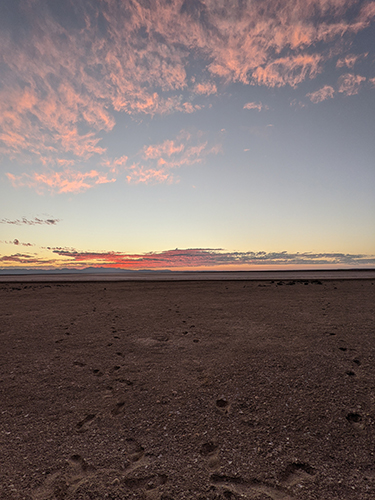 Sunset at the salt flats 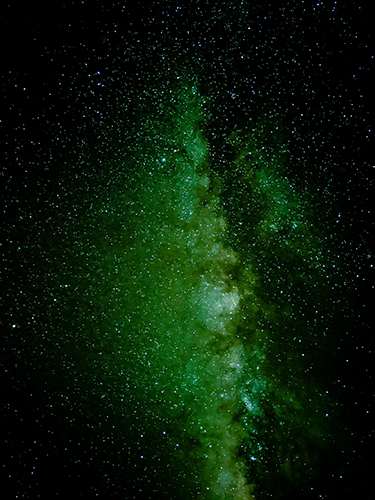 Playing with astrophotography at the salt flats!

In the morning, October 5th, we headed for Loreto where we hoped to get some information on climbing nearby from a worker at at restaurant noted in Mountain Project.

On our way we hit two military checkpoints. We'd bumped into them pretty much every other day of travling, but so far our experience had only been them asking where we were coming from and where we were going, then waving us on. Today, however, both the checkpoints we came to opted to dig through our shit for about 10 or 15 minutes before waving us on. Kelly and I kept a close eye on the agent poking around to make sure he didn't pocket anything (which luckily he didn't, since we really don't know what we would do if he did to be honest).

One of the more baffling experiences around the searches came when one of the agents was searching through my backpack (which both did). He felt a small zippered pocket in which I had some jelly beans, and asked me what they were. I said candy, to which he said "Dulces!", and I affirmed. Then he just moved on without opening the pocket. I thought that would be the perfect opportunity to catch some nefarious activity if they weren't actually jelly beans, but I guess I won't tell them how to do their jobs!

They were also nice enough about rifling through our things. At one of the checkpoints I was asked to hop out of the passenger seat, and I didn't bother putting on my sandals and just went barefoot. It's usually mid 90s farenheit out here, and both agents we interacted with pointed out that I was barefoot and commented on how hot the ground must be, but it wasn't actually so bad. I thought that was pretty nice of them, despite standing around while they looked through every nook and cranny of our home!

When we arrived, ordered dinner and drinks, and asked for him, we were told he wasn't in at the moment but that the landowners of the climbing area didn't want people climbing there until the pandemic cleared up. Major bummer.

Despite that, we made the best of our time in Loreto, which is a beautiful city in it's own right! We took some much needed showers, did some much needed laundry, and had a much needed night on the town with live music, drinks, and some small shops. 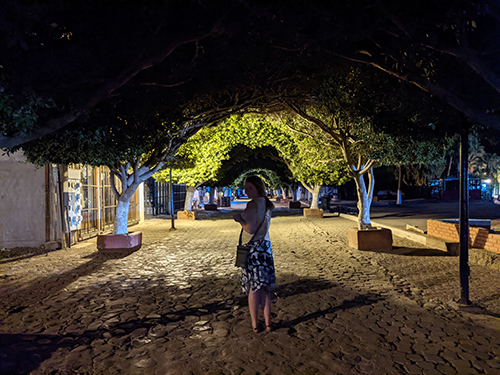 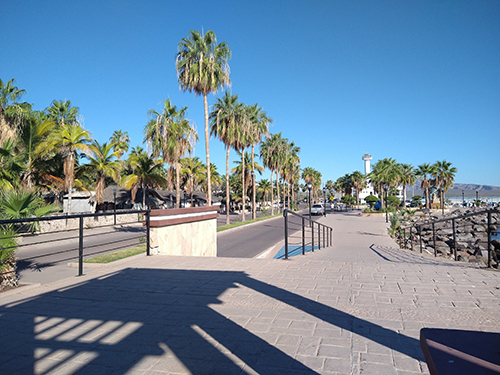 The Loreto boardwalk the morning of the 6th

We stayed at an RV pack in central Loreto for the easy access to the city, shower, and laundry facitilites, so we had to be out by check-out at 10. No problem since we usually wake up with the sun around 7am or 8am, and by 10am we were on our way to La Paz on October 6th! We were/are a little nervous about the paperwork for the ferry, so we were excited to get to La Paz early to try to be as prepared as possible.

We finally made it to La Paz and stopped by a few stores for supplies and the office for the ferry company (TMC) where we sought to get reservations. We'd read numerous blogs about how weird and frustrating the process can be, so we wanted to be on top of things. The woman in the office took down our information into a google doc and told us we coulnd't pay there, but we could go to the ferry terminal tomorrow (it was already 3pm by then) to pay, which would definitively reserve our spot. We would simply have to give our names to get in to pay, and we would be allowed since we were on the google doc. This was good news to us as we had gathered from our research that you are never guaranteed a spot on a ferry until money has changed hands, which usually happens after customs and paperwork JUST before boarding.

From there we headed for our campsite for the night, Playa Tecolote, which had absolutely GLOWING reviews on iOlverlander.

Let me tell you, it did not disappoint, holy crap.

True to the word, there was no reception, but we campedright on the beach relatively privately with a white sand beach and super clear, shallow water to play in. It was a really hot day, so we hit the water right away. Within MINUTES, we saw a wild sea turtle just bee-bopping around who hastily beat it after he noticed we'd made him, then about 5 minutes later we saw a handful of sting-rays cruise past.

We had tried to catch up to the sea turtle, but kept a distance from the sting-rays. We didn't want to pull a Steve Irwin (RIP).

After hanging around in the water for a while, we hit the small strip of bars/shops/restaurants near one end of the beach. We finally got to try ceviche, which had been recommeneded to us by everyone and their mothers upon hearing of our trip, and we still weren't 100% sure of what we were going to get until it arrived! It was super good, I don't want to break the beta, so I'll just say if you get the chance you should try ceviche.

We thought there would be wifi there to check on stuff, as we'd heard there was news from the Darien Gap that we should check out, but we hadn't been able to find out what that is. All the people working at the restuarant we went to were playing on their phones, but apparently there was no wifi. Ok. We figured the news could wait for the morning, so when we were done with our drinks and ceviches we hit Savannah, rinsed off, and got to writing! 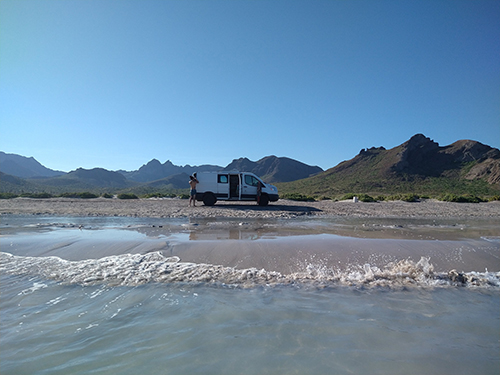 Me showering at camp using our solar shower 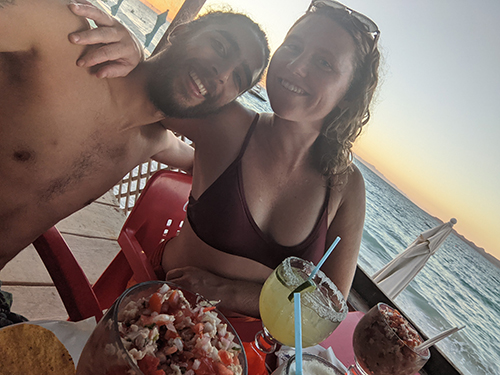 Ceviche for dinner at Tocelote! 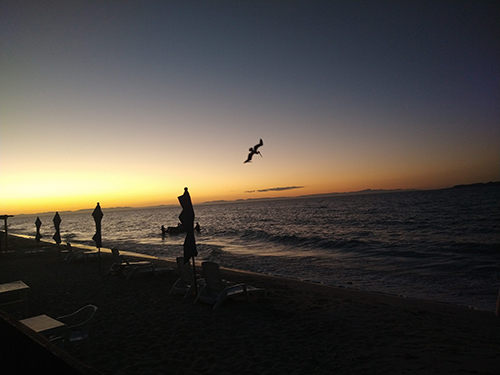 A pelican diving for fish

If there's something I wrote too little about, make a comment and ask to hear more, I'd love to answer any questions!