Well, it happened again. I didn't write about the first time because it happened in Alabama, but after we left North Carolina Savannah broke down in the middle of the highway, and we spent a weekend in small-town Alabama waiting to get the radiator replaced. After that it seemed like we would be good to go for a long time!

Then, just after hitting the mainland, we broke down briefly (the story is in this post), but managed to hit the road again quickly!

The same thing happened while driving around in Tuxtla Gutierrez, just outside Sumidero Canyon, mere blocks from a hotel we planned to relax at! This time, however, Savannah wouldn't start, or even crank. We were totally dead in the water. Kelly was able to pull over partially, but Savannah's butt was still blocking part of the road, and we couldn't even put her in neutral to push her out of the way because we were parked on a hill. 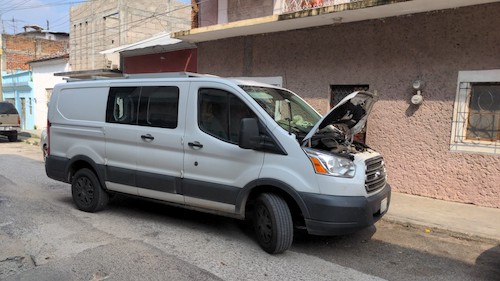 Where we were broken down

We used the OMDII sensor again to determine that we had the exact same error codes as last time, 6 powertrain codes. We found a Ford dealership a mere 3km away, but we still had to get there. I tried to call them multiple times but something was up with their system, as I just got weird static every time. We ended up calling a towing service close by, struggling with a language barrier for a few minutes, then finally working out how to text over WhatsApp to communicate instead.

We arranged a tow for $700 pesos to the Ford dealership, then waited about a half hour for the tow to arrive. During that time many cars had to squeeze past, most honking at us before attempting the squeeze. Those coming from the back couldn't see that the hood was open very easily, so some of them hung out behind us honking for a little bit until I hopped out to mime that Savannah was dead and we couldn't move. The most interesting interation was when a mexican grandma with a middle aged woman in the passenger seat pulled up next to us (from the front, so they could see the hood was open!). They seemed really annoyed we were blocking part of the road and spoke quickly in spanish to us, but all we could say was "esta muerto!" back, and they responded in more annoyed sounding spanish. Eventually the middle aged woman got out to help guide the car through and they squeaked past.

Finally, our tow arrived. The man was very friendly, and entirely missing his right eye! It took a bit of getting used to only looking at his left eye, but he made the process very easy and even helped us work things out with the security guard at the Ford dealership after arriving. The tow truck was skin and bones, inside much of the interior had been stripped so it was just frame left! He blew through several stop signs, but the breaks didn't inspire much confidence anyway so we weren't sure if that was a personal or a practical choice. 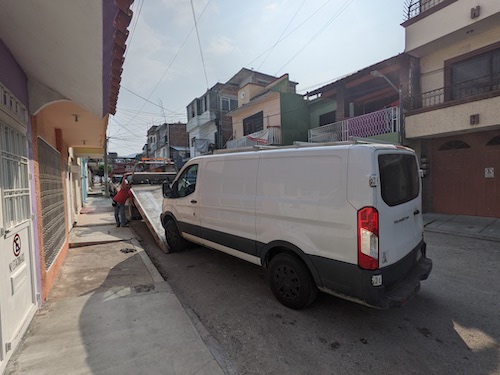 Getting Savannah loaded up 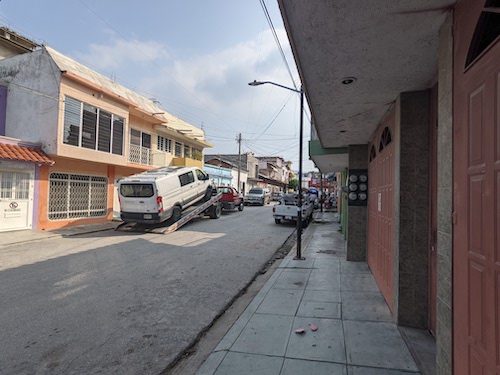 The tiny road we were stuck in

After getting to the Ford dealership, he chatted with the security guard and got us let into the service area/long term parking. Apparently they closed at 2pm on Saturday, just a few hours earlier. We went into the back and got Savannah put down where she would be in time out for the weekend, gathered what things we would need until Monday, and skedaddled. 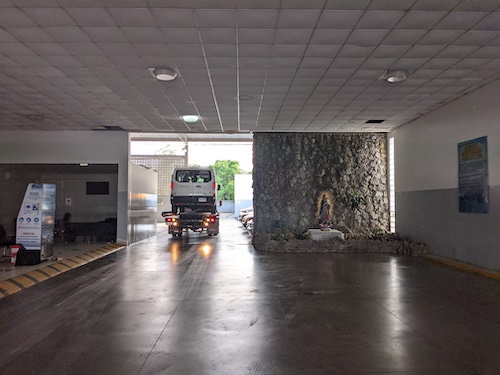 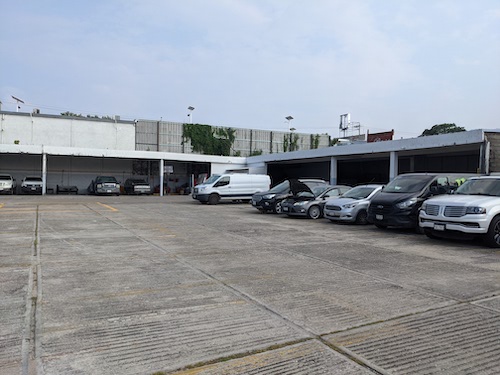 Savannah's home for the weekend

We found a pretty nice hotel to hole up in for the weekend for a little forced rest and relaxation, which brings us to.....

Today! We're hanging around the hotel eating cold pizza we ordered last night, playing on our computers to catch up with life, swimming around in the pool, and generally trying to give ourselves a break. Squid Game is pretty good so far, even if we're a little late to the party! 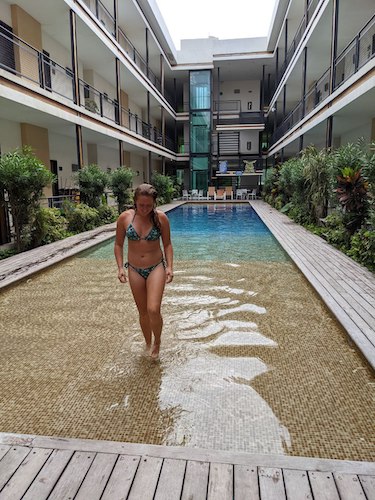 Hanging at the pool

We're really not sure when we'll be mobile again. Hopefully sometime on Monday the 18th, but whenever we get moving...

Next up: Sumidero Canyon!

We broke down in Tuxtla Gutierrez, just at outside Sumidero Canyon, and were forced to take a relaxation break. Also we get yelled at by a mexican grandma.