Cenotes And The Yucatan

I write this on the upper deck of a hotel in Belize City on the night of October 30th!

Today was another zero mile day while we waited for the shop to get back to us about Savannah, which we dropped off in the morning. We saw Dune, which was okay, go see it if you like sci-fi! We ended up checking into a hotel for the night because Savannah was still in the doctors office by the evening, she was fussy and not showing any symptoms, so the shop couldn't commit to actually replacing anything.

From the hotel in the morning we made a beeline for our favorite coffee shop (honestly we were getting pretty tired of it by this point)! After communicating with them for a bit through the morning, we determined they would probably have to keep it all week if they were going to coax any symptoms out of her, so we sprung for just replacing a part we read could very likely be the issue and cross our fingers that it does the trick. After telling them to pull the trigger, we were outta Campeche within two hours!

We blasted out of the city as fast as Savannah could take us, then headed for a mayan ruins called Oxkintoc a few hours away, we read on iOverlander we could camp in the parking lot, and that you can actually clamber around on the ruins! We made it maybe an hour before dark and were able to check out the ruins in the gathering dusk. One of the temple pyramids had small passages you could crawl into, but I was only brave enough to peek in after I saw a giant spider camouflaged as a scorpion by evolution. 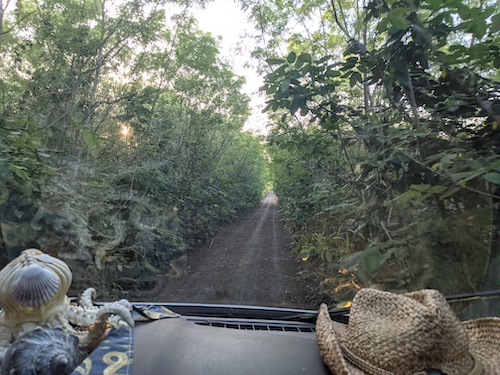 The road in was super tight for several kilometers! 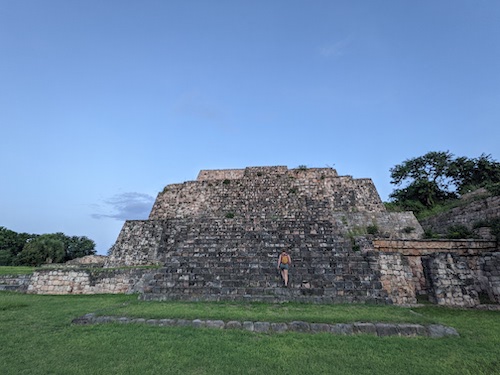 Kelly climbing one of the pyramids 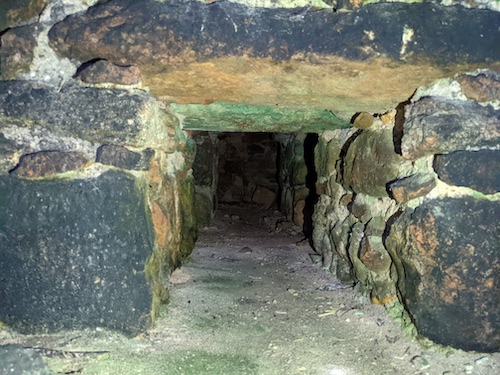 Looking inside the pyramid 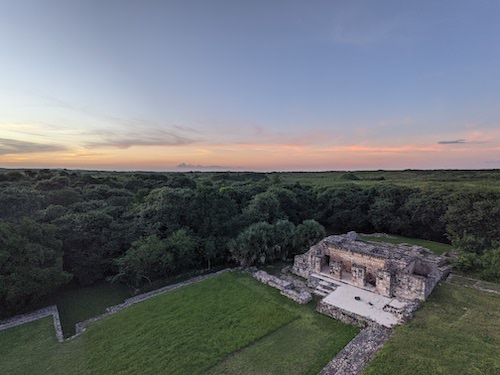 A small building from the top of a pyramid 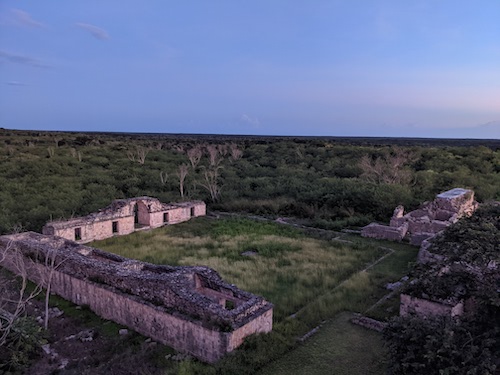 A delapidated complex from the top of another pyramid 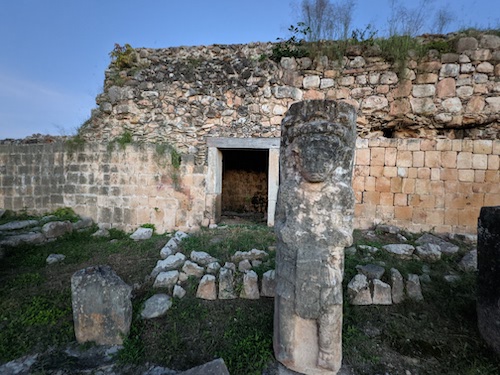 A statue outside one of the abandoned buildings

After exploring into the nightfall, we checked in to Savannah and sweated through the evening and watched a few episodes of The Good Place.

Cenote day 1! First stop: Cenote Oxman, an hour to an hour and a half away. It was a super beautiful cenote with roots spilling into it on all sides, crystal clear water, fish, and a rope swing! There was one sad fact that we learned here though: Where the hell all the tourists were. They are all in the Yucatan at the cenotes. That's where they are.

While very beautiful, the experience was a little bit tempered by people taking intensely posed instagram pictures left and right and a public pool vibe. Despite that, we had a nice swim, I took a couple swings on the rope swing and figured out how to make a backflip not look like an accident (I think), then we headed up to the restaurant to have some lunch before heading to the next cenote where we would camp for the night! 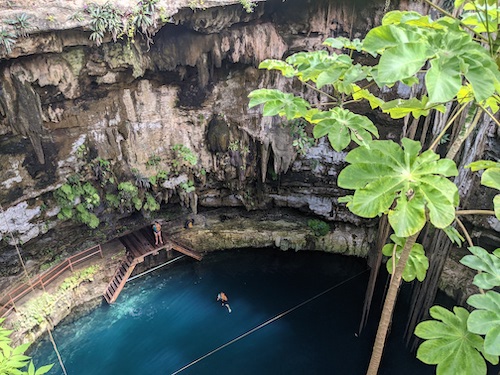 Cenote Oxman from the surface 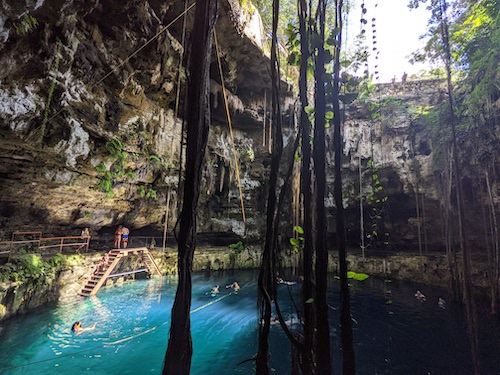 Cenote Oxman from inside

After lunchin' it up and buying a couple things at the shop, we headed for Cenote Suytun where we would spend the night. That one has a very small hole to the surface and the owners built a little thing directly below it so you can walk a path through the lake to a small circular pad directly below it to stand in a beam of sunlight. We peeked in after settling in to the camping area and there was a line of people to take the same photo on the pad, and a small crowd floating about in the lake. 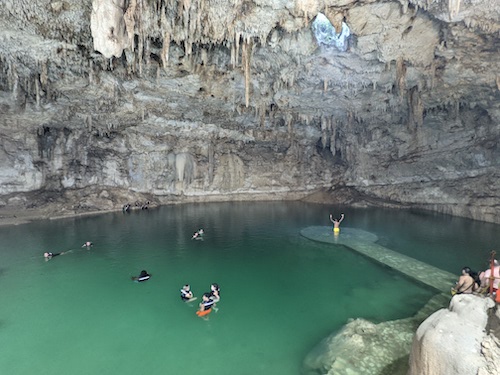 An honest view of Cenote Suytun

This brings up a lot of pondering on authenticity in photos. On the one hand it's an undeniably cool photo there, but on the other, isn't it fake to carefully take a photo that doesn't include the family with a crying baby, all wearing bright orange life vests, floating 30 feet away from you while you had that photo taken? In that sense the photo above is a lot more real than the ones they were taking. But THEN if you're in a place like that alone and ask your friend to take a picture of you or place your phone with a timer, aren't you 'posing' for a picture, which is inherently not real? I don't know, message me if you have thoughts about it, let's dig in! (there are lots of ways to do that on the Contact page)

After taking a quick peek at the cenote, we did some busy work on our computers for a little bit, then hit the sack!

On the docket for the 28th was one more cenote, then making for Tulum, a slightly more lowkey party town a bit south of Cancun, the mega party town of the area. We drove perhaps an hour to Cenote Choo-Ha, which turned out to be one of three owned by this company. He tried to sell us on paying to visit all three, but we stuck to our guns on just visiting Choo-Ha. Apparently this one is good for people who aren't good swimmers and the elderly. [shruggie]

It turns out those qualities were EXACTLY what we needed, because there was hardly anyone there! We even saw some very cute bats napping in a nook in the cave wall on the way down. We had a little area all to ourselvse and the other visitors were quietly enjoying the cenote just over the other side of this rocky hill, so it was a much nicer experience than the others! Interestingly enough every single cenote we went to seemed to have the same kind of small fish swimming about. Nature is pretty neat! 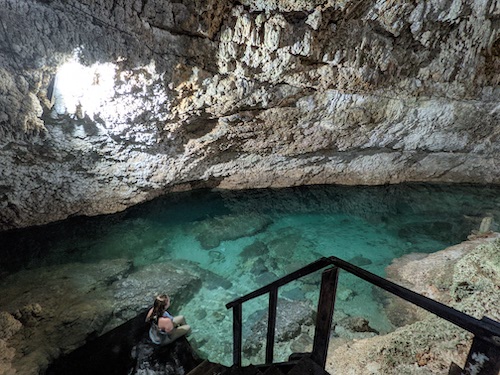 Kelly cooling off in Cenote Choo-Ha (the water was so clear as to be deceptive; for the most part it was too deep for my 5'10" self to touch!)

From Cenote Choo-Ha we headed for Tulum, where our plan was to wild camp in a reserve just south of Tulum central. Here we also learned that whatever tourists weren't busy swimming in cenotes were in Tulum (or Cancun, presumably), boozing it up. On our way through we were getting pretty hungry, like we could use some food stat, so we figured we'd stop at a restaurant that was cheap on the outskirts of town. NOPE, we had the wrong impression, it just kept getting more and more expensive the further down the road along the beach we drove. We ended up stopping at a restaurant/resort spot where a single mixed drink costs two thirds the cost of a meal, but we had a good time nonetheless! 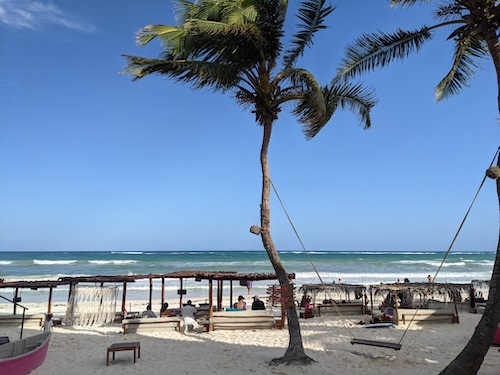 The view from our table at the restaurant

From there we made for camp. We severely underestimated the road. Despite the oppulence of the resorts on the way in, the road to the reserve was pretty crap. Then when we hit the reserve it went from more of an obstacle course of potholes than road for several kilometers until we finally made it to our camp spot! We made it just in time to enjoy the beach for a bit before checking in an hour or so after nightfall. We even had a long abandoned hut (no floor or roof anymore, more of a frame at this point) to relax in just inside the treeline from the beach. 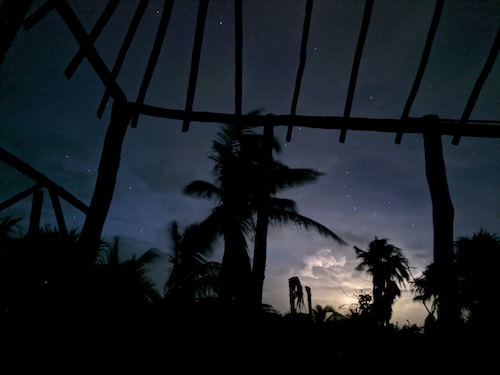 We spent our morning lazing about the beach since our next campsite was only 2 hours south (Bacalar Lagoon), and all we wanted to do before then was check out the Mayan ruins at Tulum! I can't say I've ever swam in clearer ocean water before, it was hella clear. We swam some, but mostly hung about in some shade we devised with our sarongs and read. 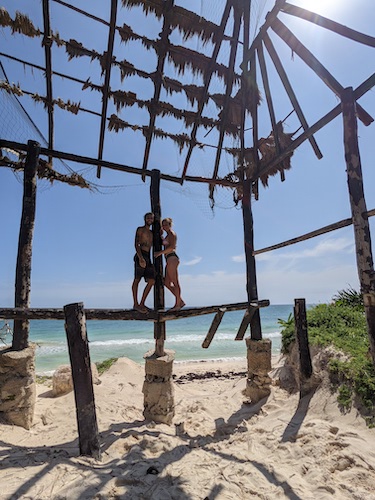 Me and Kelly in the abandoned hut 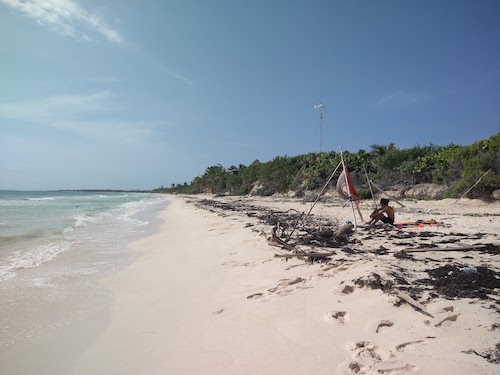 Me observing the surf from our shade spot

We made the arduous journey through the obstacle course of a road up to the ruins where we had to fend off people trying to sell us tour packages. The claim to fame for these ruins is that they're overlooking the ocean, so people also do boat tours to look at them from that perspective as well. I assume because of Tulum being a tourist town on its own, the ruins were absolutely mobbed with them. There were some cool freizes and statues, and tons of iguanas running about the ruins! We even saw one chowing down on one of his smaller bretheren. What a jerk. On the way back to Savannah after poking about the ruins I fulfilled a lifelong dream (that I actually acquired that very day after seeing people with them) of drinking directly from a coconut. Turns out I'm not even that big a fan, but now that's something I've done! 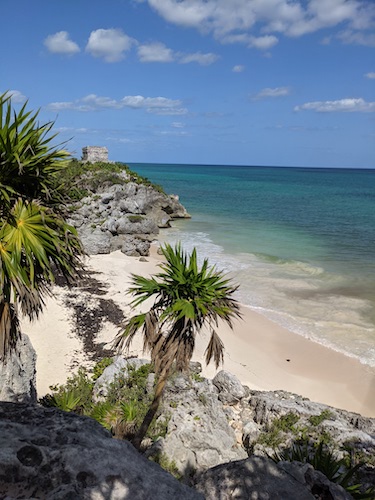 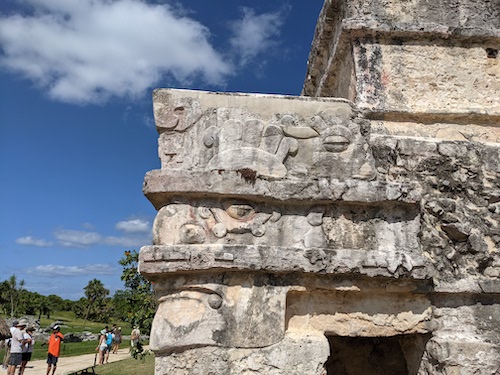 Super cool freizes on the corner of a temple 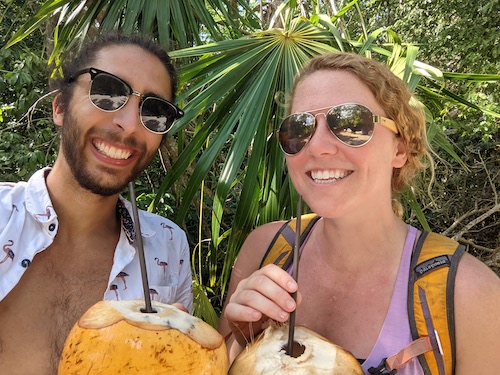 Me and Kelly with our cold coconuts

After the ruins, we made directly for Bacalar Lagoon! There weren't many options for wild camping around there, so we ended up paying 200 pesos to stay at this nice campground/hostel that had silks hanging from a tree! The rigging was horrendous, they were just girth hitched around a solid branch, and they were pretty ragged, but they worked well enough for me to do some fun sling moves!

Kelly and I were pretty much all business, though. Tomorrow, the 30th, was the day we planned to enter Belize, so we had a lot to do to make sure we were ready. We chatted with some of the other patrons, who were similarly free spirits! I didn't have time to give a silks workshop, but I did give some pointers on how to get started, as they were interested in learning more about them.

I wasn't sure I wanted to write about this in a Mexico post, but I might as well right the Mexico part here, which is pretty damn short! We got up, showered, had a banana for breakfast, then headed for Belize! At the Mexico immigration we took care of some final Mexico bureaucracy garbage and got our exit stamps, then crossed into Belize.

I'm going to leave Belize for later in a single post, since we'll only be spending three days here. Stay tuned!

We got Savannah fixed, AGAIN, saw some choice cenotes, some more ruins, a party town in the Yucatan Peninsula, then made for Belize!

For those who may not know, a cenote is a particular kind of cave. If you're a speleologist feel free to correct me in the comments, but here's my best stab at a description! They form as an underground cave not far below the surface, then a part of the ceiling collapses, and it fills part way with water, forming a lake inside the cave. The hole is sometimes roughly the circumference of the lake, as in Cenote Oxman, and other times a lot smaller than the lake, as in Cenote Suytun. The lakes are often, but not always very deep, up to 400 feet.