I write this from an adventure park/hotel Kelly and I are staying at for a few days. We've only just showed up so we still haven't gotten the vibe for what this place is actually like, but we can see the Caribbean Sea, and the port we'll be shipping Savannah to Colombia from!

Getting through the Panama side of the border turned out to be not so bad! Some confusion behind where to go, as the information we'd been going off of turned out to be outdated, but we ended up finding everything okay after asking a few people. Before we knew it, we were on our way in Panama!

Panama city was too far to make the drive in one day with a border crossing in the morning, so we made for a truck stop that a lot of overlanders use before or after crossing the border that came highly recommended on iOverlander. On the way there we were treated to a super cool waterfall right near the highway! The picture is garbage because it was with 7x zoom, but you get the idea. 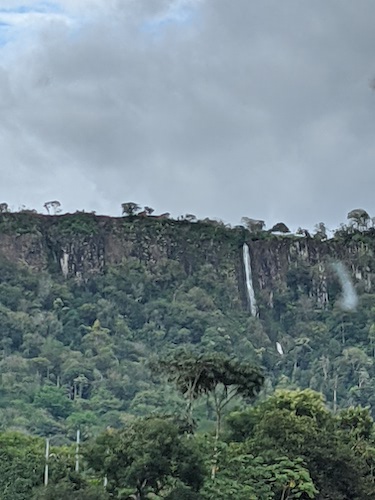 The waterfall at 7x zoom

The truck stop turned out to be super nice! We parked where we suspected most overlanders and truckers park at, an large empty area of pavement behind the building with bathrooms, restaurant, showers, laundry, and seating (wow!). We snagged some dinners and relaxed after our hectic day and wrote our posts for the latter part of our Costa Rica adventures. At some point in the evening, a kid (late teens probably, maybe early twenties) showed up with his mom who looked EXACTLY like me. Same build, same hair, same fashion sense, same eyebrows?? It was really trippy. Check it out. 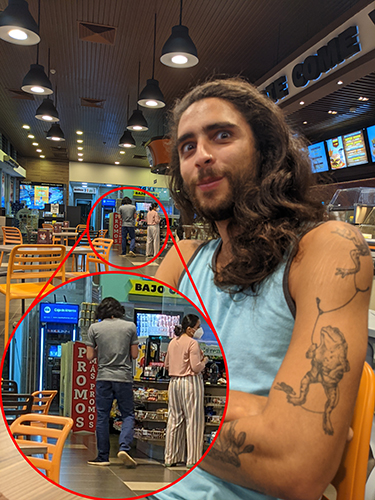 I didn't chat with him because who talks to a stranger at a gas station, you're kinda not supposed to do that just randomly, and also my spanish is garbage. Ah well.

Kelly and I both had showers, but we decided to leave laundry for later until we had a bit more time since we were heading out in the morning.

Driving day! It rained much of the previous day and seemed to continue through the night and into today, the 30th as well. We took our time in the morning, hanging about the truck stop some more and doing some research for the bureaucracy ahead, but eventually figured it was time to go, so we hit the road.

Everything went smoothly until we got close to the Panama canal. We stopped for gas before crossing the bridge over the canal... only to discover the road we planned to take after filling up was closed by cones. Google Maps gave us a detour which we took through a neighborhood back to the highway... only to find more cones. We decided to make for the very last entrance to the highway from the neighborhood before it went through a wooded area then across the canal. Eventually we hit a very steep hill on a sharp left turn (cursed tiny central american neighborhood streets), and Savannah spun her tires on the slick asphault. We ended up just heading down the hill back the way we came and headed for another bridge.

Turns out the route we had planned to take was closed to make room for more traffic coming out of the city, so there were cars driving on the left side of the road to get out! We got stuck in one of those such lanes and were minorly freaking out about how we would get where we needed to go when we were on the wrong side of the road. Long story short we finally got on the right side of the road making for a different bridge that we hoped would be passable. 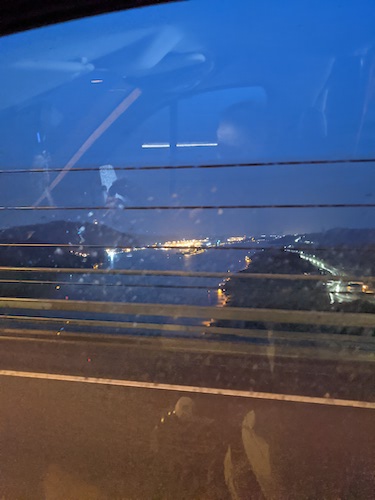 Spoiler alert: we made it across the bridge over the panama canal!

By now dark had fallen and we were still maybe 30 minutes away from our chosen camp spot behind a hotel on the banks of the canal. God, what a night cap. Anyway, we continued driving and doing our best, until Google Maps took us to a toll road. We were stuck between highway traffic and unmanned tollbooths. We moved to the side to confer on what to do, and figured our two options were to reverse back onto the highway (YIKES) or to take our chances with the toll booth and hope we didn't have to wave a line of cars behind us away so we could get back out (yikes).

We went with yikes.

The booth waited for a few tense seconds (it must be a fan of drama), then lifted the barrier and let us on our way! We had seen many other cars fly through in less than a second, but they must have had a Panapass that the booth read remotely, so it took a bit to identify us through other methods.

We metaphorically burned rubber straight to our camp spot with only a minor misdirection that was quickly resolved. We felt like we were a rally car team with Kelly being the driver and me the navigator in the passenger seat, it was insane. We were finally stopped in a cozy dead end road next to a Raddison hotel overlooked by the very bridge that had betrayed us so long ago at around 8pm, 2 hours after dark. At about 10:30 an RV joined us, it seems to be a fairly popular spot for overlanders!

Step 1 of shipping Savannah: Get her inspected so they could make sure we didn't steal an engine? I don't know, all I know is we need to go to a state office so they can sign off on the VIN for us to ship it out to Colombia. They only inspect 25 cars a day, so we have to be on the ball to get in. We got up at 5:30am and were on our way to the inspection place by 5:50am, and there by 6:15am! Well, we were stupid early. They started doing things at 8am, and the next car showed up at about 7am. 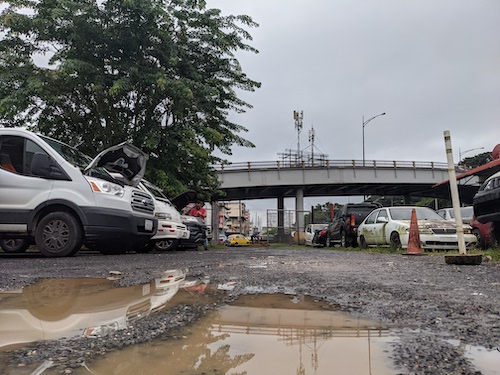 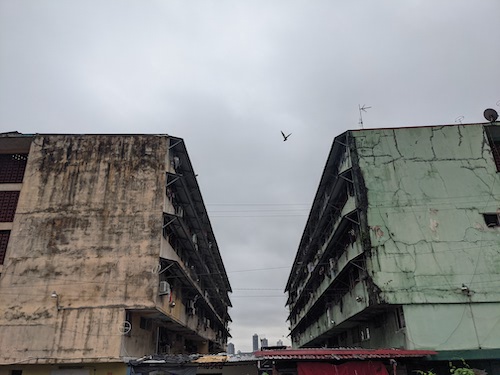 Buildings behind the inspection place. I was pretty bored.

I'll spare you all the technical details (If you're an overlander looking for tips message me, I'd love to help!). We got it done after a few hours of sitting around like bumps on a log, then hit up a coffee shop. It was about 10am and we had to go back to a building just across the highway from where we got the inspection to pick up the papers, as they had to check with interpol that everything was on the up and up. We got ourselves some breakfast at the coffee shop and did some computer things that had been awaiting attention.

Kelly was very burned out on the city after our driving escapades, so I excitedly caught an uber in the middle of the city to do some shopping for miscellaneous things we were missing. I'd planned to uber back, but I ended up finding an electric scooter rental, you know those Bird or Limebike scooter things, and took that all the way back to the coffee shop! It was a wild ride. I was really lucky I was wearing my cargo pants as I had to load them up. 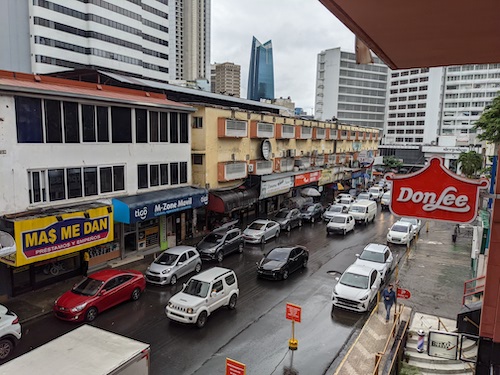 It had stopped raining as I was in the store, so thankfully I wasn't getting soaked, but the ground was still very much damp as hell. I zoomed through puddles, across broken sidewalks, through hectic intersections, and drifted/stumbled across random outcroppings of tile until coming to a no ride zone and the scooter was disabled. Bummer.

I checked the map and I still had a bit to go to the coffee shop, and the no ride zome was only for this intersection, which was comprised of about three major roads all coming together and an overpass to merge into and out of. I figured I'd walk my loudly beeping scooter through the no ride zone then keep on truckin'! 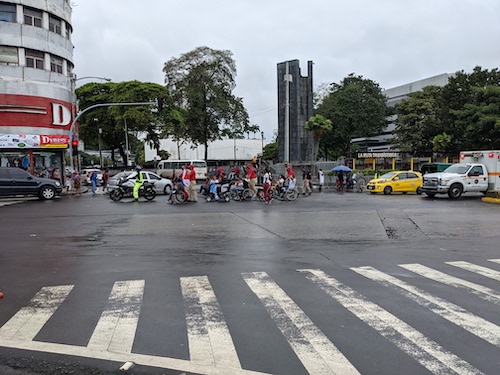 A protest by disabled people, they were all in wheelchairs parading down the major road

I finally made it back on my scooter and scooted through some side streets until I finally conceded I needed to keep a closer eye on the map. Turns out that's the secret to navigation, as I was soon back at the coffee shop! Kelly and I had some lunch and then it was time to get the paperwork. 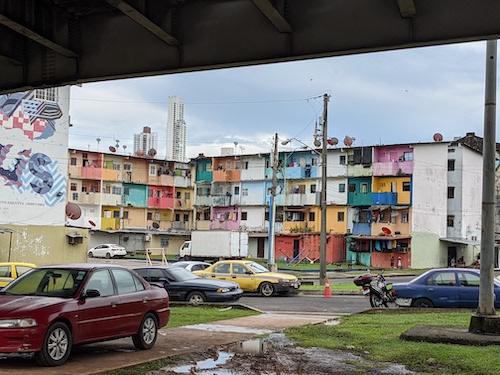 Buildings outside where we parked to get our paperwork

Another hour or so of waiting later and we were paperworked up! Now to head to a camp spot for a few nights while we wait for the right time to pay our $1200 ticket for Savannah's boat. We picked out a cool camp spot on a long spit overlooking the city. We grabbed some dinner and hung out around Savannah for the evening, watching the gathering dusk around the city and playing spit inside Savannah after dark. A good evening! 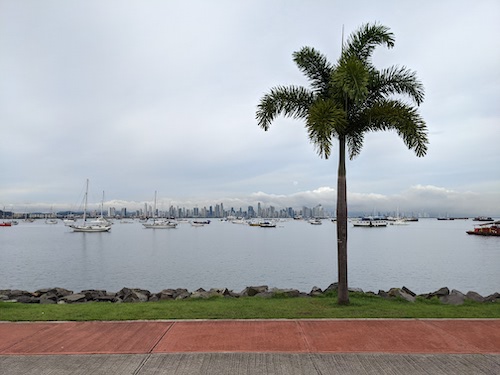 Our view from Savannah. Nice! 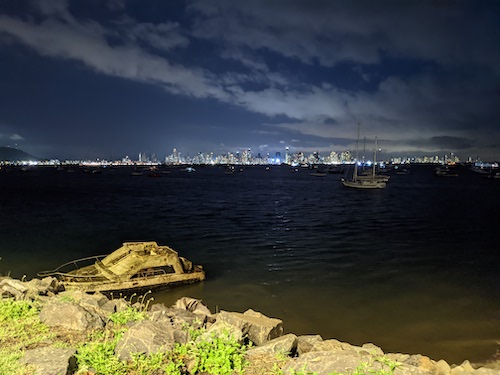 Total rest day. Or I guess as much of a rest day as we could have. We didn't move from the spit at all! It was stupid hot, so we kinda bathed in our own sweat all day, but otherwise it was damn nice! We rented a four wheeled bicycle that we could both peddle to tour the bike paths up and down the spit a bit, which turned out to be way harder work than we'd bargained for! 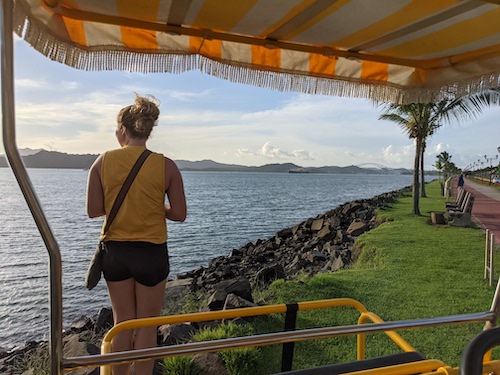 Kelly looking over the Panama Canal

The day was just sitting around looking for things to do. Those can be really nice sometimes, they put the days when you have so much to do you think your legs will fall off in perspective.

All that's left in the Panama City stage is to pay for the ticket! First thing we hit a bank and withdrew $700 from an ATM to bring our total up to $1200. Then we promptly handed over the entire wad of cash to a teller. If there's one thing I've learned from life it's that wads of cash never last.

Anyway, after taking care of that we could finally get the hell out of Panama City! Another hectic, stressful thirty minutes of driving followed by an hour and a half of more sane, highway driving later and we made it to La Granja, a weird amalgam of a hospitality and adventure business. Apparently they have horses, ziplines, a pool, a restaurant, and hotel. Our next move to prepare Savannah for shipping has to wait until Tuesday the 7th, so it looks like we'll be spending plenty of time here.

We make a beeline for Panama City after crossing the border, have a crazy time driving in the city for the first time at night in the rain, find some pretty nice urban camping options, and start our long journey through the bureaucracy of shipping Savannah to Colombia!