I'm writing this from La Granja in multiple different spurts because we really don't have much to do. Wind comes in quick, sometimes intense gusts that give short reprieves from the stifling heat. Sometimes cats and dogs wander past, accepting momentary pets until it's time for them to move along on their important business.

We didn't really do a ton today, and it was absolutely glorious. We played a ton of cards, watched a few movies, and did some planning for how we would get ourselves to Colombia to meet up with Savannah after her voyage!

We took a quick jaunt to explore the close area, where we found the pool (a kinda small, neat, home-made lookin' pool with two levels) and a horse! Kelly knew what had to be done. We went back to Savannah to grab a rotten apple we'd hung onto for too long. On our way back to give it to a horse we were joined by a spunky cat who probably had nothing better to do! 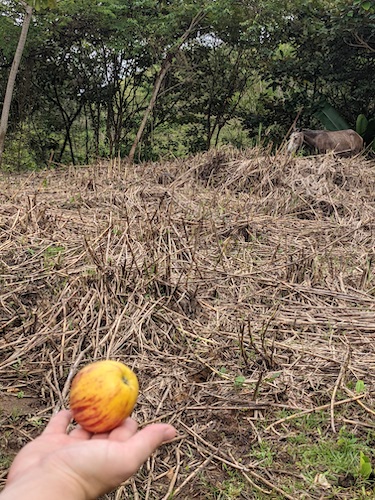 The horse ignoring our apple 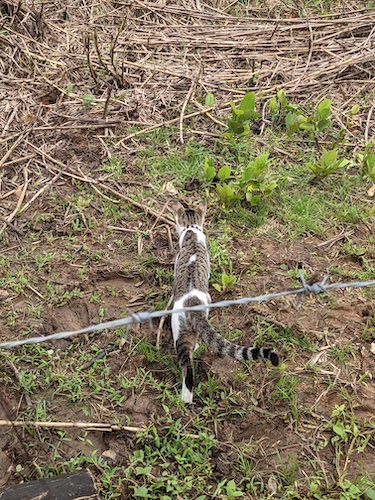 Well the horse just didn't seem interested. He stood there and continued munching on dead grass. Eventually we figured we could only stand there holding an apple out for so long, so Kelly made a perfect throw right to him! ... And he still ignored it. Ah well, Kelly said he'd be able to smell it out for sure, so if he wants it he'll have it!

That night we were treated to the most beautiful sunset I've ever seen in my life, the entire world seemed to turn orange under it, and it only lasted about 3 minutes! 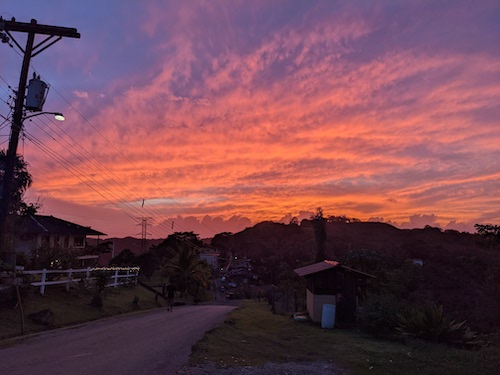 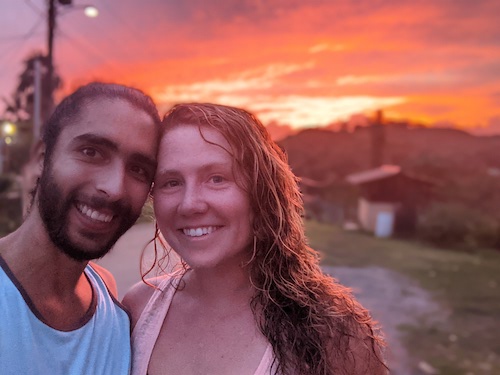 Also, later that night we were adopted by a super cute beagle! He followed me to Savannah when I went to mix us a nightcap, and as soon as I opened the door he hopped right in! He insisted on some pets (pictured below), and when I stopped he leapt onto the bed with his muddy feet! What a goof. 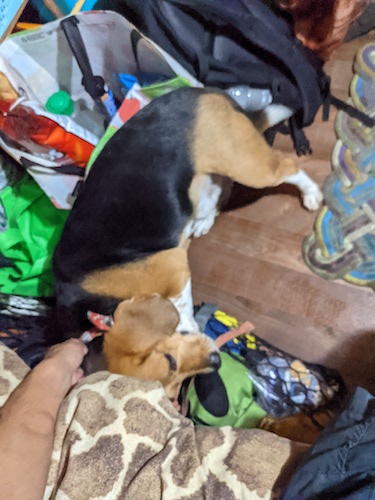 Today we finally met our container buddies, Jessie and Catherine! We're both going to be loading up our rigs into a shipping container on Tuesday, December 7th, so it's high time we met up! They've been on the road for over 2 years now, and plan on circumnavigating the globe to return to the US from the bering strait!

You can learn more about them and their mission at this link!

We chatted with them for a bit and did yet more planning for how we would get to Colombia. It's finally starting to come to gether!!!

The work in progress plan for how to get to Colombia, as of 5pm on December 5th, is as follows:

1. Bus back to Panama City

Here's a map of our plan for the visual ones among you! If you click View This in the lower right corner, you can learn more by clicking on the waypoints for a description of why we're at each spot, and each line is named after the mode of transportation it represents.

While this method is a lot more complicated than either sailing through the San Blas islands over 5 days or flying to Colombia directly, it's a lot cheaper than the cruise, and a lot more interesting than flying. A win win!

After planning our guts out, Kelly and I went for a longer jaunt down the road to see what was there. Here are some pictures of what was there! 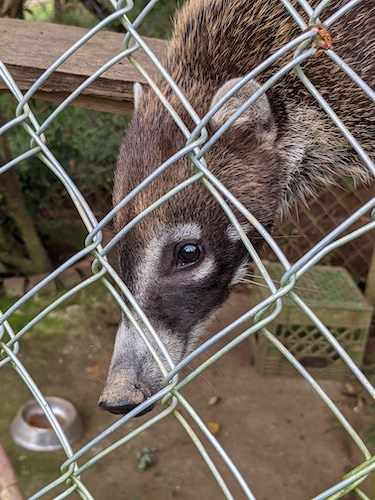 I don't know what this animal is called, but it had a very cool nose and beautiful eyes 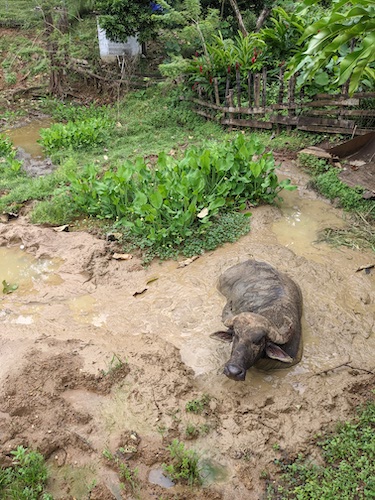 Everybody wants a waterbuffalo - yours is fast but mine is slow 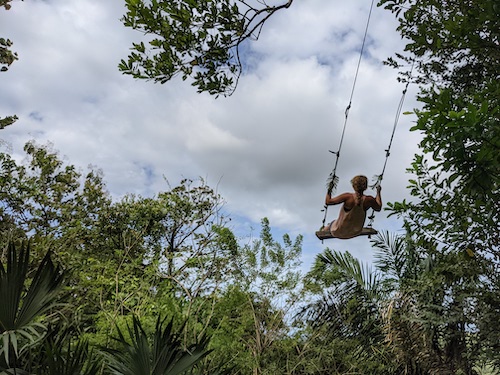 We found a swing that went out over the jungle on a steep hill! 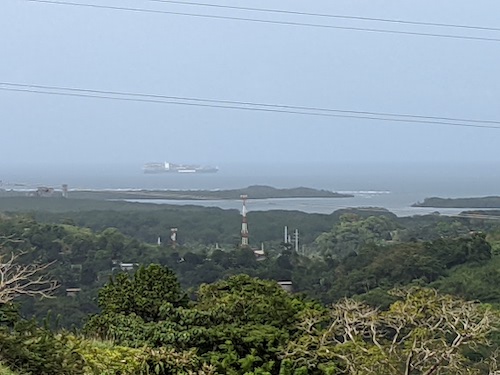 A view of Colón at 7x from a higher vantage point. Maybe that's Savannah's boat! 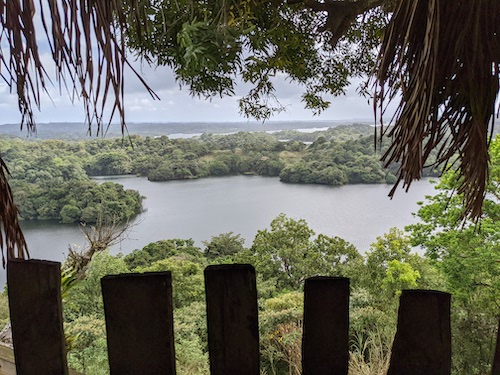 Gatun Lake from a treehouse we found. The Panama Canal uses it to get across Panama! 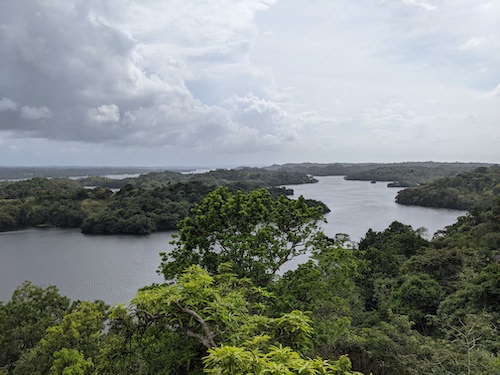 Another view of Gatun Lake 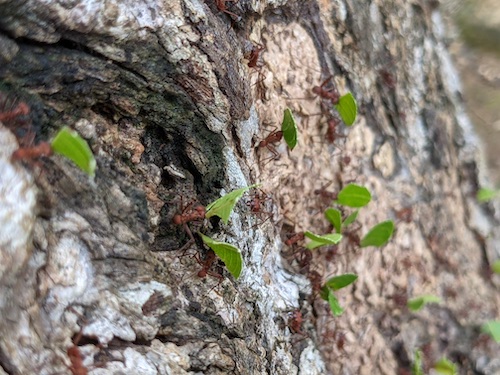 Ants!! These guys were all over the place busily working away. In some places they even wore out little tracks in the grass!

We spent the evening chatting with Jesse and Catherine over dinner.

All prepping for sending Savannah off tomorrow! We have to pack for about a week of roughing it in pretty much unknown conditions, but we've had to wing it a lot in the past and we read several accounts of other people who took this route, so we feel confident! We aren't bringing our computers because that would be stupid, so the next update will be from Colombia!!

We bide our time at the adventure park/hostel by playing cards and wandering about aimlessly, finally meet our container buddies, and plan as meticulously as we can for our transport to Colombia.