Well, we didn't bottom either of the caves that we attempted during my time in Alabama, but I had an absolute blast trying, and I pushed myself further than I've gone previously in caving, so I count the trip as a big win nonetheless!
I rung out my time in NC the night before my 6am flight with a contra dance, and I really can't think of a better way to do so! It was only the second contra dance I've made it to since the pandemic, so I was loathe to miss one for a silly thing like sleeping before a day of travel. The energy was high, everyone was loving being there, and I got to end the night with a FANTASTIC waltz!
I arrived in Huntsville, Alabama the following afternoon, hung out with my extended family there and caught up with them until B, my Alabama caving partner, picked me up early in the night.
We drove about 45 minutes to his house outside Huntsville and set about preparing for Bleeding Ghyll the next day. We would have to make it a quick trip due to a bonfire he was hosting the next evening, so we didn't anticipate bottoming. At about 1am we finally were ready enough, downed a shot of mezcal each for a nightcap, then hit the sack.

We awoke at the ripe old time of 8am-ish and loaded up into his car and made for Bleeding Ghyll, about a half hour drive away. Much to our chagrin, we discovered that, sometime in the last few years, the area had been logged right up to about 30 feet from the cave entrance. They had even logged the nearby streambed! Of course, time heals all wounds, but I could imagine how pretty the area must have been prior to the logging.
We geared up and wriggled into the cave about 20 feet, past a couple adorable salamanders, to the first rappell. The first rappel, which was about 53 feet, descended through a waterfall, so almost immediately after B descended out of sight communication was difficult between us. I found a comfortable spot to wait, turned off my light, and listened to the sound of the crashing water until I heard a faint "OFF ROPE" from somewhere down the pit. It was time!
I turned on my light again and rigged my rappel rack and started rappelling the pit. It was beautiful! After perhaps 10 feet, if that, the pit opened up and belled out into a free-hanging rappel and I could look around at the empty, cylindrical pit, with perhaps a 7-foot radius. The water from the waterfall glistened on the walls, reflecting the light beautifully.
After I reached the ground and de-rigged, B slid through a small passage to where it widened up in another passage, where I passed our gear to him, then passed through myself. We scooted along to the top of the next drop, a ~90 foot pit with a ledge 20 feet from the deck(1). Due to the need to get back to his place in time to prepare for the bonfire, we decided I would be the only one to descend this pit, then check out the cave at the bottom, and ascend back up. For safety, B showed me how to do a change-over(2) should anything go wrong mid-rappel. Due to my previous ropework experience in rock climbing I took to it quickly, and off I went! The pit was beautiful, it was much like the first but on a bigger scale. When I arrived at the ledge, I swung onto it to stand comfortably and peered down to the bottom. I turned my light to maximum to see further and looked around. After a few seconds it went back to the dim setting. I tried my second light on bright, then it soon turned to dim. I tried the same on my third with the same result.
Uh oh.
In light of my lights freaking out and me having no idea what was going on or if they would freak out more in the near future, I performed a change-over on the ledge and zoomed up the rope. This pit also contained a waterfall, ut it was slightly offset from the rappel line so it didn't bother me too much, but it did, once again, have the effect of making communication difficult. Once I reached be and apprised him of the situation, he informed me the batteries on my lights were low, and he should light my way where he could and I would keep mine off as often as possible. We were both somewhat stumped as to how this happened, as we had checked all of our batteries the night before, but they could have been unreliable. That's why you always bring three lights, kids! We backed out of the cave, I ascended the first pit with B lighting my way where he could, then I ascended in the dark when I passed where he could see me. Ropework in the pitch black is an interesting experience, especially when it's through a waterfall! It heightens your sense of touch and hearing, accentuating the sound of the water, the groan of the gear, your own huffing and puffing, and the cold of any exposed skin or water hitting your body. I was made aware that I was near the top of the pit when my helmet cracked into a rock where the rappel ceased to be free-hanging. I turned my light onto dim and scampered up the remaining 20 feet, then waited for B to arrive after announcing that I was off rope. After he came up, we gathered our gear and exited the cave.

We arrived back at B's home and, after we took care of our dirty gear, he started preparing for the bonfire. I got to work on some chores on my phone that had built up over the last few days while nursing a cider that B gave me from his beer cellar with hundreds of drinks he had collected over the years. I spent that time in his back yard among his many flowers, fruit trees and various pretty plants. There couldn't have been a better place to relax before the socializing at the bonfire! 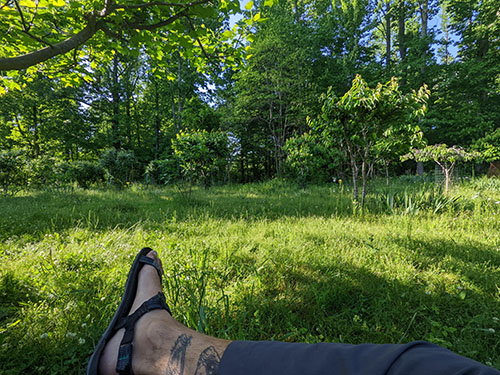 From my chilling spot in the back yard 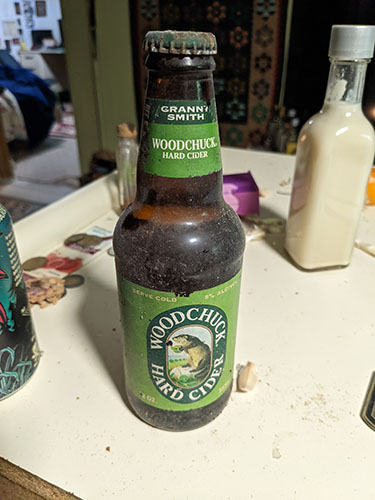 My cider. It shows it's age, but tastes like new!

Soon B's friends arrived. They were all former cavers and were chock full of adventure stories from all over the world! It was a ton of fun to chat with them and hear their stories. They had obviously been friends for a long time, their rapport was on point! We also got to try various kinds of mezcal that B had gotten from Oaxaca on his last caving trip to Mexico. This was the first time I tried Mezcal, and oh my god it was so good. It made me wish Kelly and I had made it to Oaxaca on our trip last year, but of course there will always be more things to see than time to see them, and we sure as shit didn't waste any time! Soon, though, we started to get tired, and many of the guests had a lot further than a 30 second walk to get home.
Soon, it was just me and B sitting at the bonfire. We decided that, as we had most of the day tomorrow to cave and we'd both been burning the candle at both ends for a few days, we would not set an alarm and make our plan for Canyon Cave in the morning. Off to bed we went! 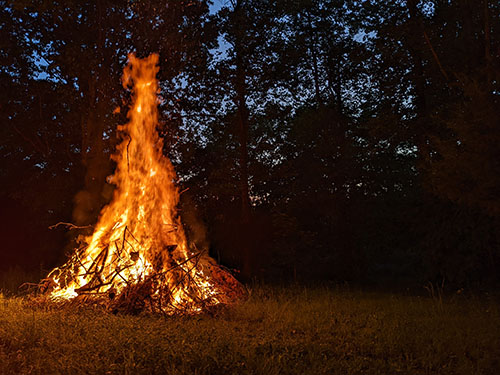 The bonfire shortly after dark fell 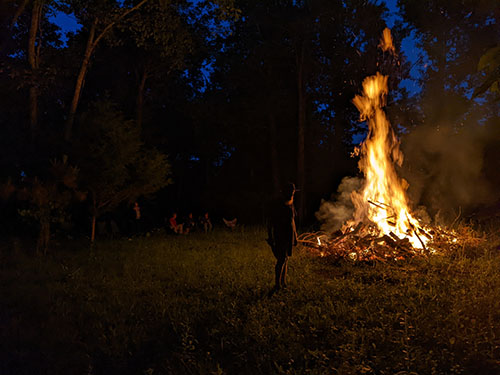 B in front of the fire

In the morning, we decided that we had JUST enough time to do a pull-through(3) of Canyon cave. We had some breakfast and put our gear together then headed out! The landowner situation for Canyon cave was somewhat dicey, so B threw me out of the car with our gear on our way past, parked elsewhere, then came to meet me and we walked through the woods together to the entrance. 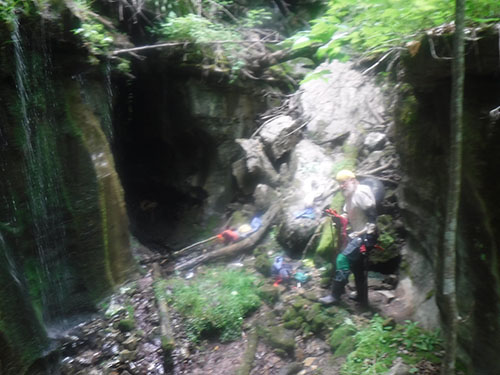 B gearing up at the entrance to Canyon cave 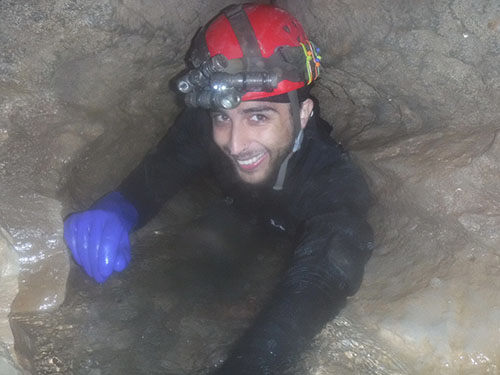 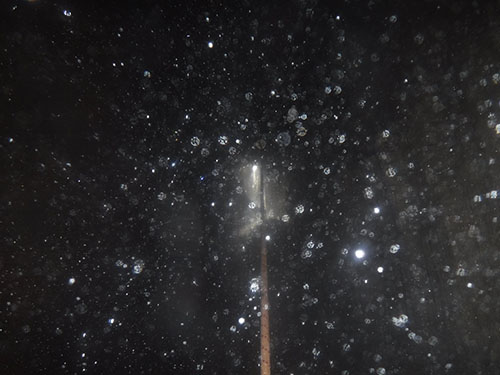 The best picture we could get of me ascending the waterfall. Water was everywhere! 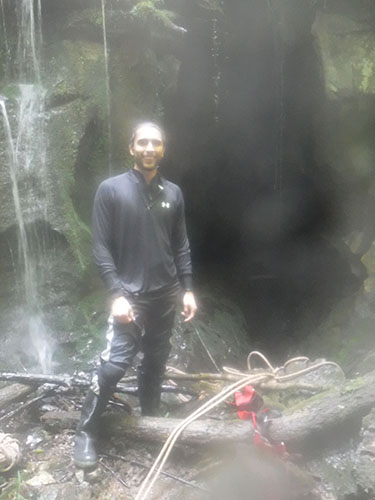 We made it out and took our sweet time getting back to his place, as we had plenty of time having left when we did. I made it back to my relatives in time for dinner and prepped for my journey to Brazil the next day. I had over 24 hours of travel ahead of me to reach the farm in Campo Grande, which is a story for another post! I'm writing this from my families farm in Campo Grande, where I'm hoping to have lots of time to relax and heal up my hurt finger (strained a ligament while climbing) before hitting Rio with the force of a thousand suns.
Or hopefully the force of a thousand suns, none of which have strained ligaments.

I do two caves in Alabama with B. We don't bottom either of them, but I have an absolute blast and push myself further than I ever have under ground.

A song I jammed out to while writing this