I write this from a resort-y hostel we're camping at overlooking a lagoon in Nicaragua. A lot to catch up on!

The border crossing from Honduras continues! We did well leaving Honduras, then again at the Covid checkpoint, then we went through immigration without much hassle. Minutes after we arrived at the immigration building, as we waited for an open agent, one of the agents tripped the fire alarm when she went through a door. We got to listen to the alarm for most of our time there. When an agent was free, he walked up to us, gestured towards the sound, and said "Welcome!" We were happy to start off the process on a good foot, given our previous crappy experiences!

He was super chill. We spent most of our time waiting, and when he asked for a copy of our PCR tests, which we didn't have as we had given them to the woman at the Covid checkpoint an hour earlier, he just shrugged it off and moved on. Nice!

Once we were out of immigration, the only fixer around told us we needed to pull up to one of the parking spaces just outside customs. We tried our best to keep him out of our setup, but it's hard to ignore someone giving you information you can't not hear that you actually could use. We pulled up to the parking space and went into customs with him on our heels. That went pretty smoothly as well, with them x-raying my backpack, as far as we could tell to simply check a box that they had x-rayed something. After we were all done with customs and getting Savannah's import permit (we didn't need the title, awesome!), the fixer biked ahead of us to show us where to go to get mandatory insurance, then shoehorned his way into the process of getting it by taking our paperwork to the person to take care of it and advising us to park off the road. He told us it would cost $20US, but we knew for a fact that it cost $13 from someone who went through the process a few months beforehand on iOverlander. We gave him all the cash we had, which added up to roughly $17US and he came back with a proof of insurance form, bingo! However, after he handed it to us, he asked for a tip. We only had about $3US worth of Nicaraguan Còrdobas, which we gave, but he sorrowfully indicated that that was far too low. Well he took all our cash for the insurance, which we were sure he'd skimmed off the top. He wouldn't stop guilting us, even though we gave him literally all our cash, and he wouldn't take the random coins we had from Guatemala and elsewhere. He asked for a shirt but I kinda like all my shirts I brought, so I ended up giving him an unopened bottle of iced coffee from earlier in the day and a used lighter I discovered in the "junk drawer" we keep between the front seats. He got the picture that we didn't have diddly-squat anymore and we were off!

Kelly was feeling pretty under the weather, so our first stop was a hospital in Léon, since urgent care isn't a thing south of the border. They were able to get her out the door in less than 30 minutes with antibiotics that pack a punch! Public healthcare for the win. We had a nice dinner in town and spent the night on the street outside a hostel. 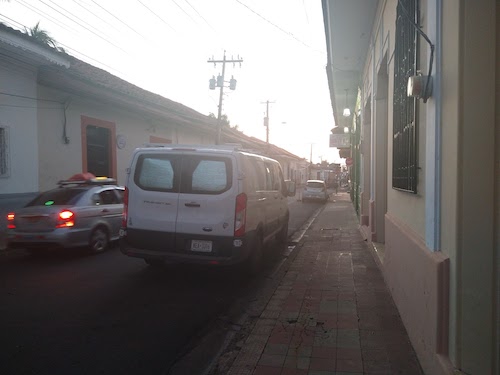 Our campsite for the night 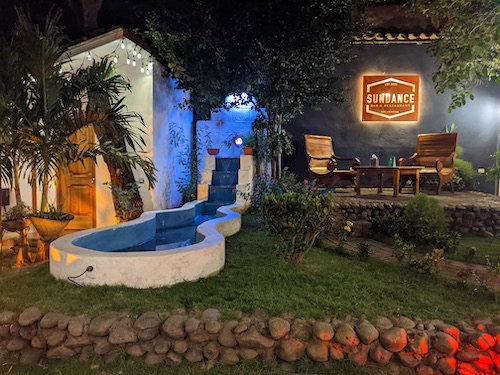 From our table at the restaurant!

The night outside the hostel was good save for some guy on a bike who would bike past maybe every half hour or hour from 11pm 1am with a horn that sounded like a scream. If that ain't emblematic of what it's like to live in a van I don't know what is.

At this point we were super ready for a break. We found a cozy hostel at a lagoon not far and planned to spend two nights there resting. Masaya Volcano was on the way and we wanted to do it, since you can drive right to the edge of the caldera, and we're loathe to dirve in the wrong direction of our ultimate goal. So off we went to the volcano!

It was pretty damn neat. The smell of sulfur was SUPER bad in some places; so bad that we couldn't stay in some of the worst places for longer than a minute or two. It's known as one of the 9 gates of hell because you can look directly down into the caldera that is constantly emitting smoke, enough that it obscures your view into its depths.

The smoking caldera is only one caldera out of three, but the only one still active. There were some trails around the other calderas, offering sweeping views of the surrounding landscape and some plaques describing the view and teaching about how the volcanoes affected the landscape! Here are some neat pictures. 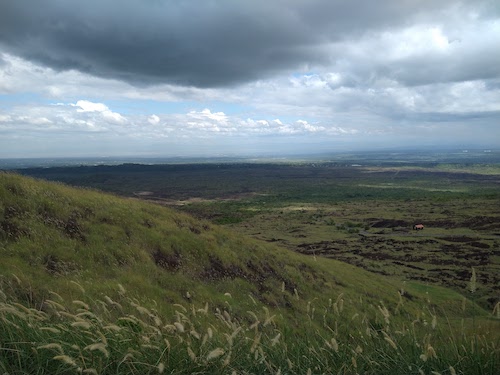 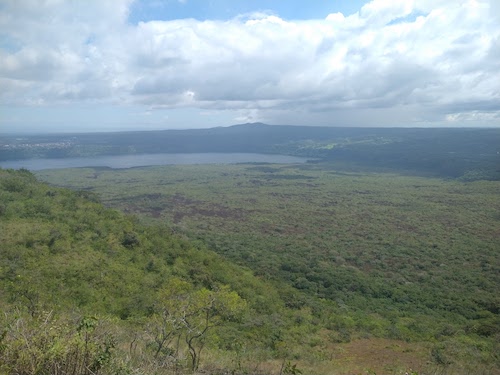 A lagoon formed in an old crater. All lagoons in Nicaragua have volcanic origins! 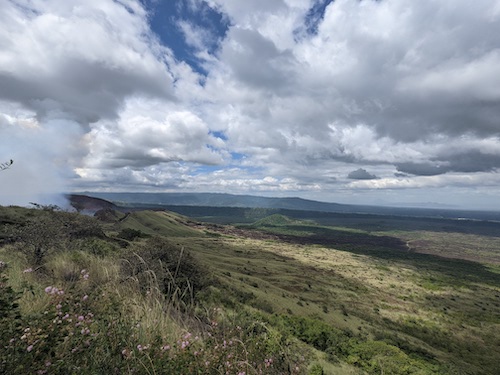 A different perspective of the ancient lava flow 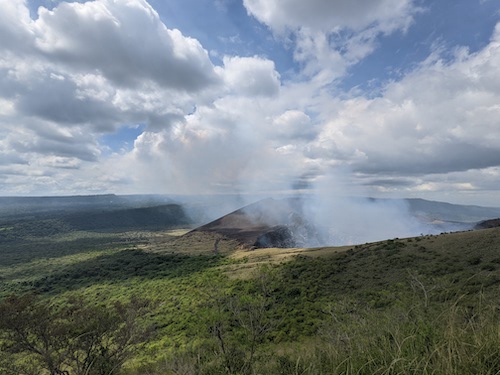 The active caldera from the side of its taller neighbor 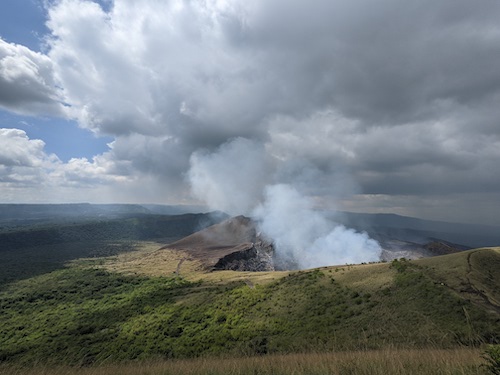 Another pic of the same caldera above 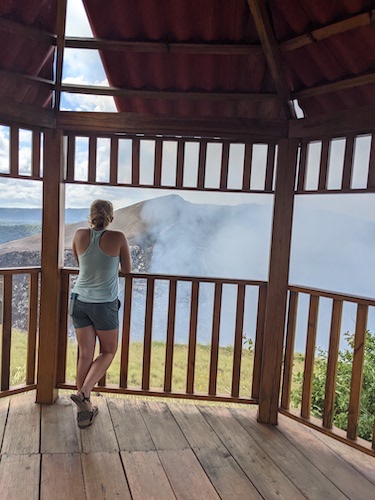 Kelly viewing the active caldera from a viewing thingy 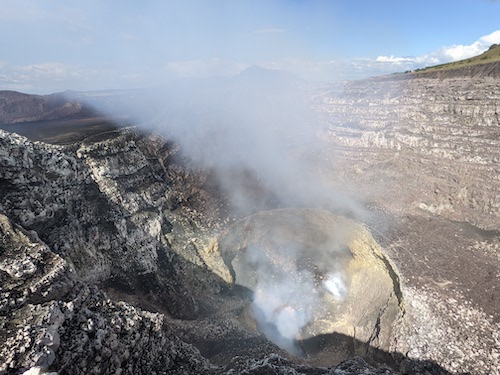 Looking directly into the active caldera from the closest viewpoint

We hiked pretty much every trail there was on the volcano, so it was time to head out. To dinner and the hostel for a break! 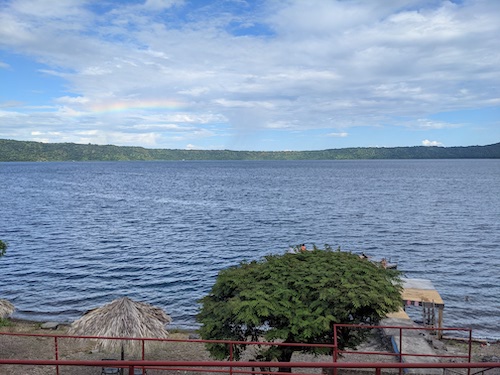 After dinner we hit the hostel, organized a price, did some work on our computers in the early dark, then hit the dang sack.

Which brings us to today! We had some tasty granola and yogurt breakfast, swam in the lagoon, wrote a lot to catch up on our respective websites, I added a neat feature to the Chile trip homepage so the campsite map is on the page (check it out, I'm proud of it), day drank, witnessed SO MANY PEOPLE blatantly posing for selfies that were so far from the truth of what their time here was like we had to laugh, and generally just hung out until the day got away from us. Here's a picture from our view working for most of the morning. 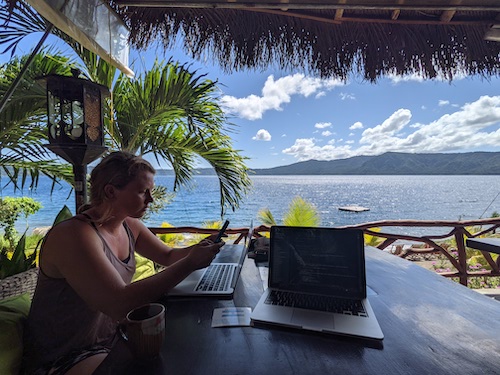 Our working spot for the morning

Next up we have at least one more Nicaragua adventure before going to Costa Rica, so that's coming once it happens and I get the chance to write about it!

We have yet another experience with a fixer, we check out one of the 9 gates of hell, and we take a bit of a break at a lagoon.