On Top of Northern Europe

I decided that, for this trip, I'd try out a method of traveling where I plan specific, big goals, then let my day to day be determined by chance and happenstance while in pursuit of my big goals. First up of those goals: Climb Galdhopiggen, the tallest peak in Northern Europe, located in Jotunheimen National Park in Norway!
The morning of my departure, Eve gave me a ride to town where she works and gave me a piece of cardboard for a sign to help me hitchhike north. I lucked out and the very first car that passed by when I started thumbing it stopped for me and gave me a ride to the next larger town! Off to a good start. 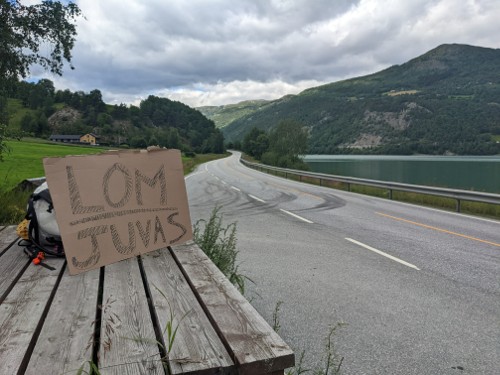 A picture of my sign with the way ahead in the background. Waiting for another ride!
(Lom is the nearest town to Juvasshytta Lodge, the start of the trail to Galdhopiggen)

Up until this point, I had only ever hitchhiked as a last leg method of transportation when adventuring, like in Alaska, or out of convenience to make life a little easier. This time, however, it was my primary mode of transportation to an ultimate destination 1,000 miles away! I didn't quite know what to expect, so I mentally prepared myself to spend a few days getting to Juvasshytta Lodge. Somehow I lucked out and strung together four different rides to arrive at Juvasshytta in time for dinner on the very same day I left the workaway!
I had some time to wait here and there, where I quickly memorized this Hobbit walking song from The Lord of The Rings:

I made camp a few hundred meters away from the lodge (I don't have that kind of money!) for the night and it was... one of my more interesting camps of the trip. I brought my camping hammock, which can be converted to a bivy (a human shaped tent or waterproof bag), which I soon learned was not nearly rugged enough for such a trip. This camp was well above the tree-line, so I found a patch of dirt among the rocks big enough to accomodate it, and the high winds immediately overcame the tent poles and nearly folded it over! Ya gotta do what ya gotta do. 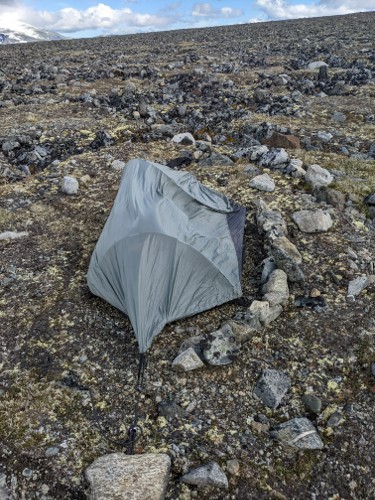 My sleeping arrangements for the night. Yikes! 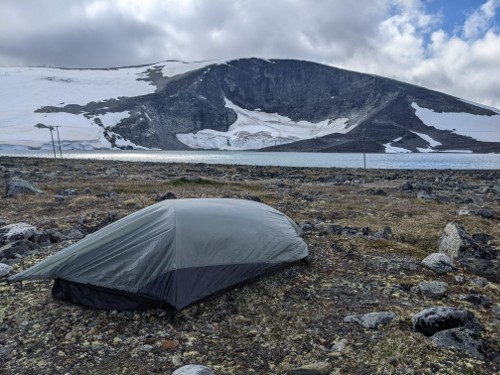 My cmapsite afforded me a nice view of a small glacier descending into a lake next door! 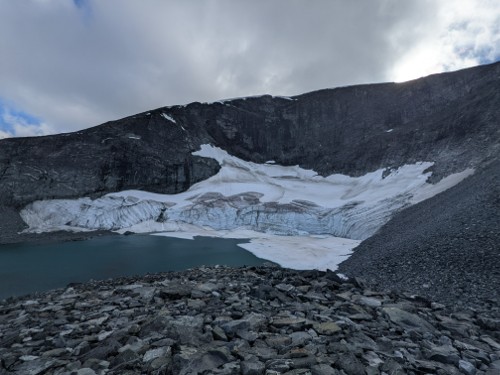 Before hitting the sack I hiked to an overlook closer to the glacier.

It was a long night.
The wind would come in gusts; sometimes I would have seconds to minutes of respite, then another powerful gust would sweep over me, causing the rain fly to beat against my head. The next day I spoke some Danish climbers who walked past me about 30 oe 45 minutes before I arose who said they could see my silhouette against the rain fly. I got a fitful night of sleep, but I did get some winks here and there!
At last my alarm sounded and it was time to go. After a quick trek through loose rocks and occasional dirt patches, I reached the Styggebreen glacier, my route up to the summit of Galdhopiggen. This would be my first glacier ever, and I was well aware that it is best practice not to walk a glacier unroped and without a partner. The day before I chatted with several people around Juvasshytta, but everyone was taking part in the guided ascents, which regularly see groups of 75-100 people per rope, including children and dogs.
Not my scene.
The main worry with glacier travel in general is the presence of crevasses, or cracks in the ice. Depending on the season, there can be snow covering these crevasses, making them difficult or impossible to detect. If you walk over a crevasse on the snow, it's possible that your weight could cause the snow to collapse, plunging you into the crevasse, which can be quite deep. With a rope team, your companions can catch and hold you with the rope while you ascend the rope back to the surface. If you're alone there's not much to do but not fall into a crevasse in the first place.
I'm no stranger to turning back within spitting distance of glaciers, which was an option I entertained, but I thought that the odds were in my favor this time. I started early, when the snow is at its strongest, it was a good season to be up there, and, being heavily guided, I figured I could follow the trail of footprints to keep to the safest route. 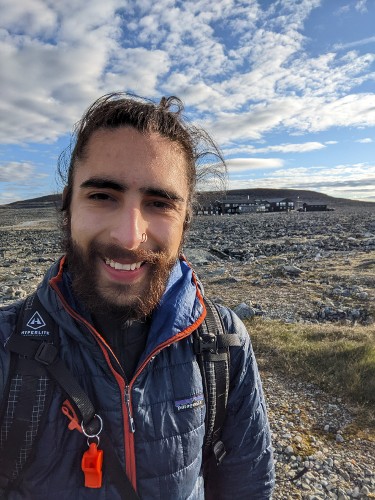 Heading out from Juvasshytta early in the morning. 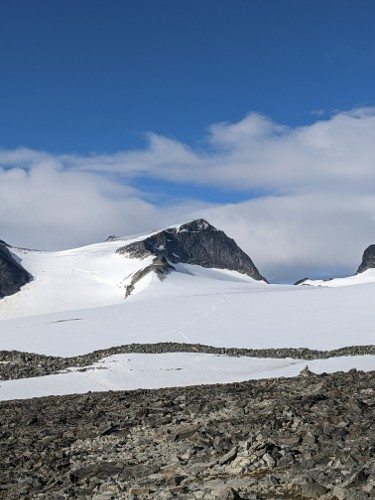 My first view of Styggebreen glacier below the peak of Galdhopiggen. My route cuts directly across the glacier to the shoulder of rock, then up the ridge to the summit. 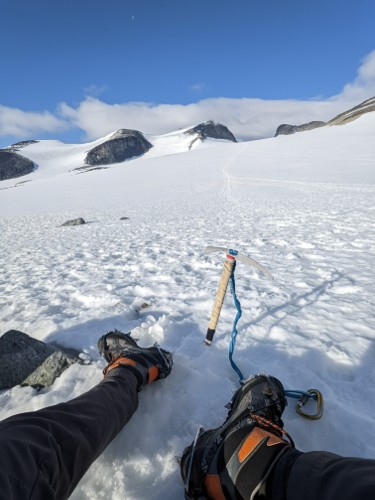 Geared up and ready to cross the glacier!

After excitedly gearing up at the edge of the glacier, I headed off. As I set out on the glacier I could see a party of two about two thirds of the way across, just starting the up-hill portion to reach the rocky ridge. It was a steady, uneventful trudge until I reached the bare rock of the ridge, where I removed my crampons and stowed my ice axe. The rock made for a more engaging, but steeper trudge higher and higher towards the summit. Eventually it gave way to more snow where I took out my ice axe to help me stay stable and to stop me if I slipped as I dug the fronts of my boots into the snow.
Before I knew it, I was at the summit! 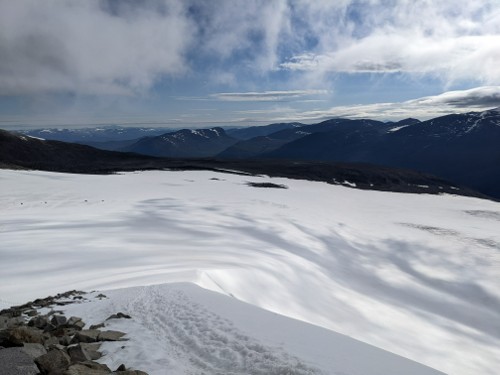 The view looking back over Styggebreen glacier after reaching the rocky ridge. 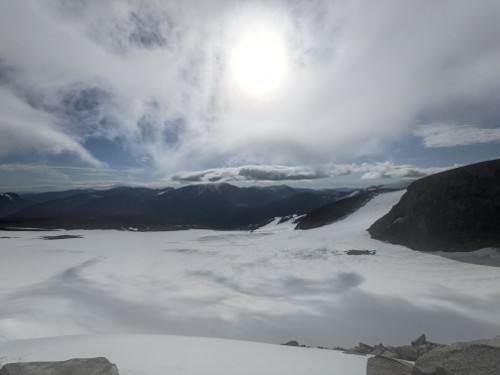 Cool clouds from the ridge. 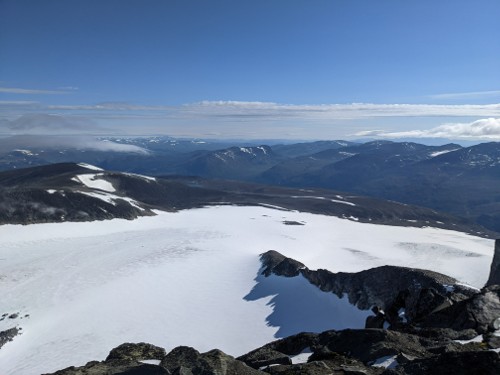 Styggebreen glacier and the lower part of the ridge seen from higher up. 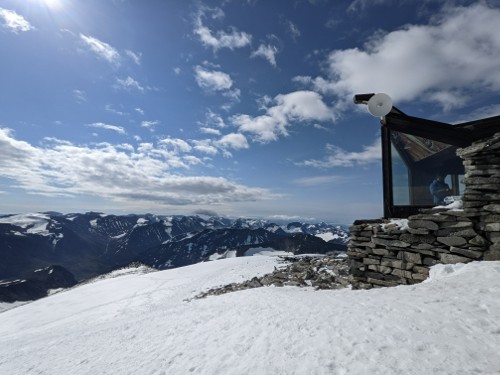 The hut at the summit of Galdhopiggen. Swanky! 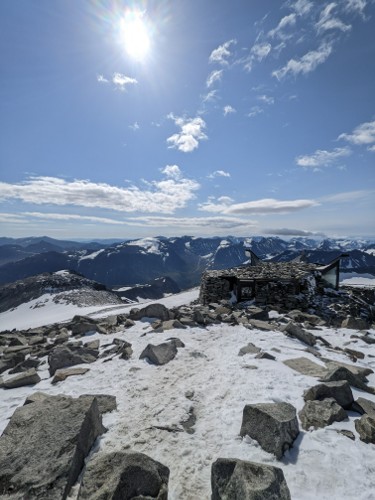 The summit hut viewed from the true summit. 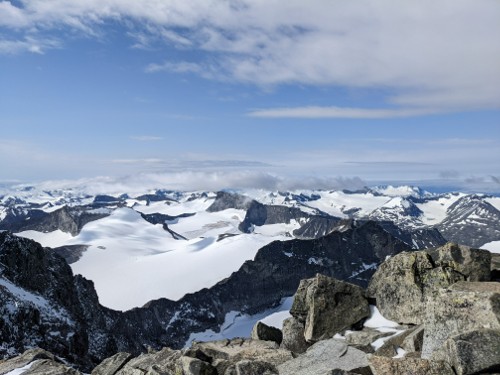 As I got closer to the hut at the summit, I saw that there were a surprising number of people there already! Most of them must have come from Spiterstulen, a hotel down in the valley below. The route from Spiterstulen does not require a glacier crossing, so it probably sees more traffic. An employee outside the hut called me over and asked if I came from Juvasshytta or Spiterstulen. Upon hearing that I crossed the glacier, she low-key scolded me for doing so alone and explained how redonculously dangerous such an endeavor was (I thought she was hamming it up a bit), and offered to let me join one of the guided groups for free for the return journey if I couldn't find another party to allow me to join. I thanked her and went up to the true summit to celebrate the trek!
After taking a few pictures at the summit I went into the hut for a snack and a quick rest. Inside, I met the party of two I'd seen ahead of me on the glacier and we chatted for a bit. They were a father/son pair from Denmark named Gorm and Jakob, respectively. Gorm had been mountaineering since he was a young man, and soloed Mont Blanc at 18! He also still has and uses most of his original gear from back then; someone from a museum even approached him to buy his crampons, but he still uses them.
Gorm agreed that the employee was hamming it up a bit, but they welcomed me to tie into their rope for the trip back and I gratefully accepted; there's no reason to invite unnecessary risk! We all got along great, and their Danish sense of humor reminded me of some of the deadpan jokes I like to make.
Before making our way down we stopped by the summit to take a few more pictures. 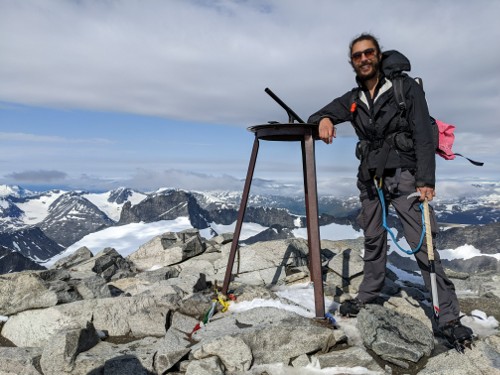 Me at the true summit. 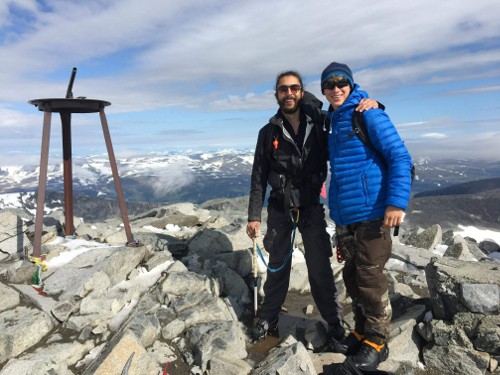 Me and Jakob at the true summit. 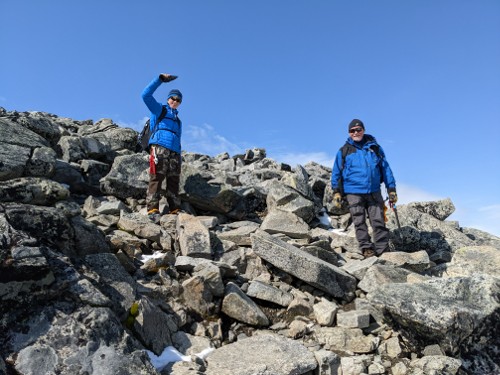 Jakob and Gorm making their way down through the rocks.

We chatted idly as we made our way down, and we eventually got to talking about the guided trips. None of us knew much about them other than they were a tad touristy for our tastes, especially considering progress would be very slow due to the number of people involved. Eventually, we could even see one off in the distance, just starting across the glacier . . . We were 100% right about the state of the guided groups. After passing the first group, we would regularly have to work our way around or between them! 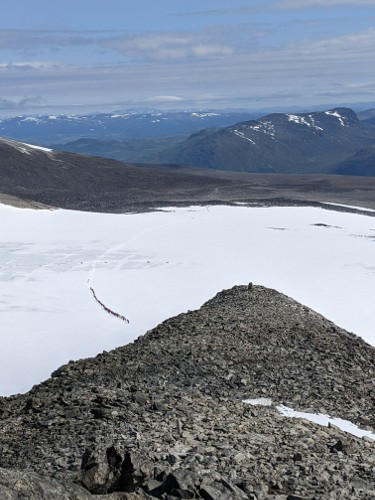 The first guided group we spied from the descent. We started calling them glacier snakes. 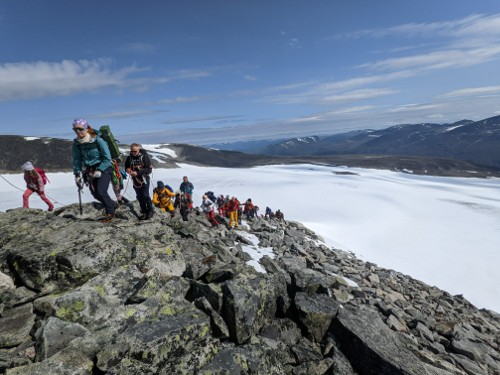 Passing a glacier snake while still on the rocks. 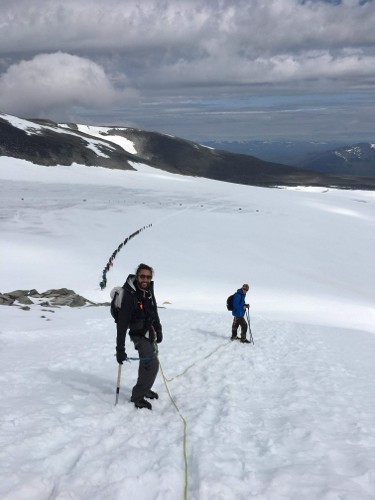 Me and Jakob roped up and heading down. Glacier snake in the background. 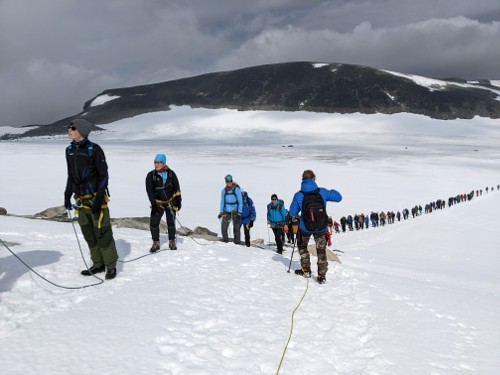 Passing a glacier snake just after we reached the glacier. Notice how they're standing around? They're waiting for people to keep moving up ahead.

The snow was noticably more slushy now compared to the way up, closer to the center of the glacier our feet would occasionally sink in 8-12 inches! We passed quite a few glacier snakes, I said hello to a few people who I chatted with the day before, and soon we were off the glacier and back on solid ground. We stowed our glacier gear and made our way through the rocks back to Juvasshytta. 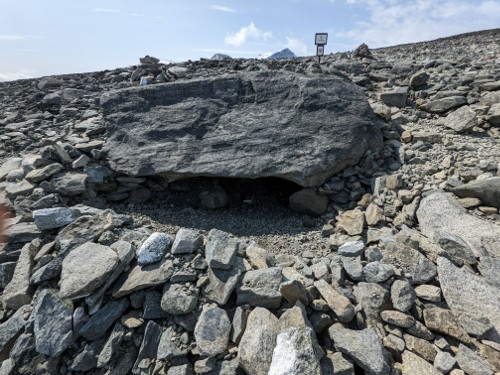 A small rock shelter with just enough room inside to sleep one near the trail. How I wish I knew of this the day before when making camp, it would have been infinitely better than my bivy!!

After reaching Juvasshytta, Gorm generously offered to give me a ride back to town. I had been considering staying up there a little longer and hiking some of the trails, but after the night I had I was ready to get out of there. The next day Gorm and Jakob were to begin their drive back to Denmark, so they also offered to pick me up in the morning to take me to the North/South highway, where they would turn South and I would work on catching a ride further North.
I quickly packed up my camp (I found out the wind had been so bad that the tent poles had broken through the fabric catches they were slotted into), and soon we were back down in Lom. I hopped out at a grocery store and eventually found a place to make camp on the bank of the river that runs through town. I spent the evening with a fire, reading a book, and settling in to sleep early to hide from the mosquitoes after my fire died. 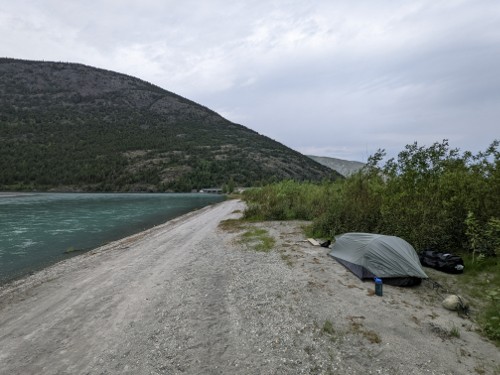 My campsite for the night. 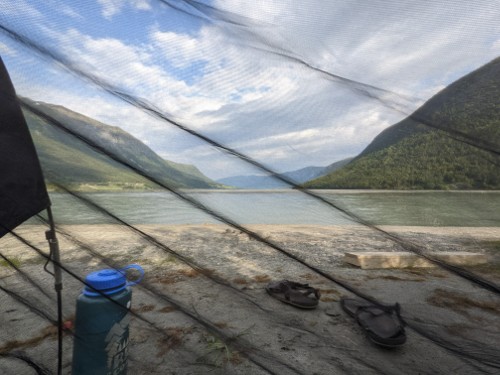 The view from my bivy. I slept without the rain fly since there was no rain in the forecast.

And so ends my Jotunheimen adventure, and I can check off one of my big goals for the trip: To walk across a glacier! While it didn't exactly get the blood pumping like some of my other adventures, I think it was the perfect beginning to set the stage for many more alpine adventures.
Please pardon how long it's taking me to get this stuff written up, it's hard to find time now that I'm back in school in Chapel Hill! Next up is hitchhiking through Norway and some trad climbing adventures in Lofoten; stay tuned!

I hitchhike to Jotunheimen NP and summit Galdhopiggen

A song I jammed out to during these adventures

My thanks to Gorm, Jakob, Kristin and the three other people who gave me rides to Jotunheimen. I couldn't have done this without your kindness and good conversation!