I write this from a resort-y hostel we're camping at overlooking a lagoon in Nicaragua.

The crossing into El Salvador from Guatemala wasn't too bad, just the normal bureaucratic waiting, except that they required the original vaccine card, which is sitting around in Durham, North Carolina. They wouldn't accept a printed image of it, and they were ready to kick us back to Guatemala because I didn't have mine (Kelly, wisely, has hers). Luckily, I was able to find a printable vaccine verification from the NC vaccine database, which was perfect, and we were good to go! The immigration agent was super done with my shit from the moment I said I didn't have the original, though.

Anyway, we made it through finally! By the time we were on our way in El Salvador, though, it was starting to get late. We headed for the closest location on iOverlander, a hotel where people had been allowed to stay in the parking lot. It was called an Auto Hotel in Google Maps, which it turns out means each room has a garage for your car to stay in (Savannah didn't fit). A night in the room versus in the van in the parking lot was only $5 more, and would include a bathroom and shower, so we sprung for that! After we got into the room, we discovered the reason behind the private garages. It turns out Auto Hotel is another way to say Love Hotel. There were measures set up for ultimate privacy, like the garage and a little door leading to a cubby with another door to the outside for contactless payment and delivery of drinks and such. Also a gigantic mirror across from the bed. ALSO a napkin dispenser directly above the bed. Wow.

Sadly, no pictures because we were pretty tired and super ready to hit the sack.

After driving more in El Salvador later, we came to learn we were lucky with this one. Some of them have stripper poles in the corner! (as told by images in Google Maps locations)

First thing we headed for a hostel on the beach about halfway through El Salvador called the Hammock Plantation to spend a few hours chilling and planning for the border to Honduras. We decided that, to make some time, we would just blast through Honduras, since all the things we'd found to do there were pretty far out of our way to the north. 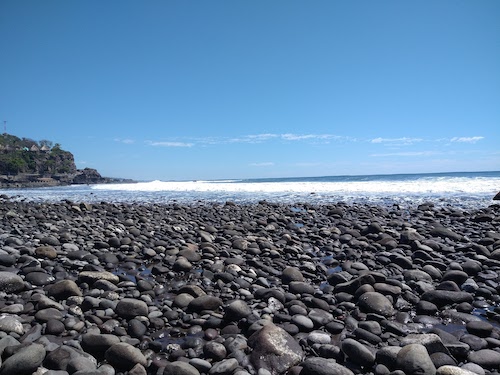 The rocky beach at the hostel 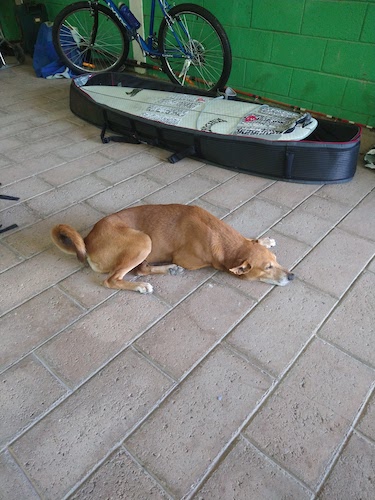 A very cute, slightly mangey dog at the hostel

After preparing for crossing into Honduras and making some plans for packrafting dowon the way in El Salvador, we went for dinner at a restaurant up the street. It turned out to be dinosaur themed, with a massive brontosaurus (which is a FAKE DINOSAUR) automaton guarding its patrons. Anyway, we had a nice dinner above the cliff overlooking waves crashing against the rocks below. 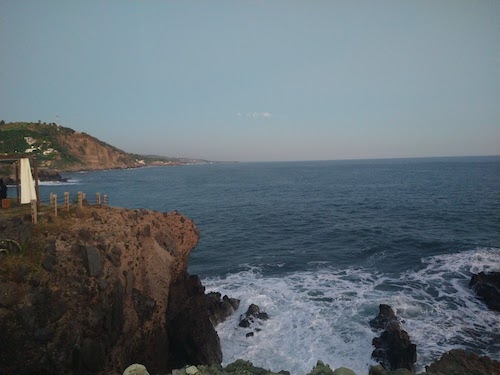 The view from our dinner table 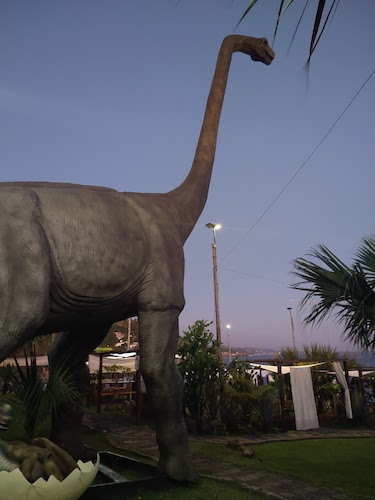 The brontosaurus at the restaurant

The night at the hostel was a little toasty, but quiet!

Another first thing driving away morning! Kelly was feeling under the weather with an infection, so we decided to call it a day on the driving a bit earlier than planned (we had been shooting for the town closest to Honduras), and found a hotel Usulutan. When we pulled up, we legit thought it might have been abandoned. The parking lot was cracked and had debris laying around and the building sorely needed the business end of a power washer. But there was a guy at reception! They wouldn't be able to get us into a room for 4 hours, but they said we could hang out in the lobby if we liked, on the couch.

We agreed and settled in, but ended up using our time to look for a better place that didn't feel abandoned, and we found a spot in the jungle right on the water in Jiquilisco bay, close to where my packrafting plan was! We would just approach it from the other side of the bay compared to my original plan. We told the guy at reception we were yeeting out of there and made for the new spot. It turns out there was a rutted, rough dirt road for several miles that took us 30-45 minutes to cross, but we finally made it. They only needed about 2 hours to get us in somewhere, so we lived it up in some hammocks until they were ready.

Chilling, waiting for our room to be ready 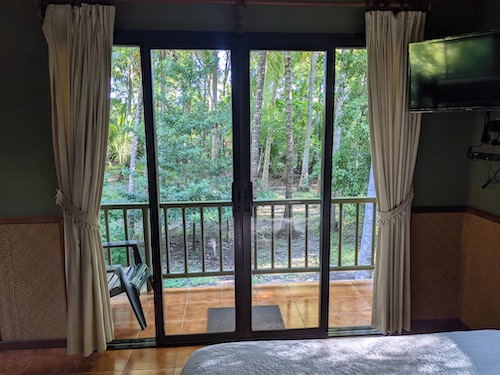 The view from our room

After we got our stuff into our room, Kelly felt up to doing some paddling, so we took our rafts and hit the water! It seemed like the water was pushing us back, so we figured it was the perfect time to head out, then have an easy time coming back. I'd read about a tunnel through the mangrove forest and thought I was able to find it on the map (the guiding companies keep the details under wraps online), so we headed in that direction!

A few bends in the river/bay later, we came across a creek feeding in to the main channel. A spoopy, tunnel-lookin' creek. We had to go in. 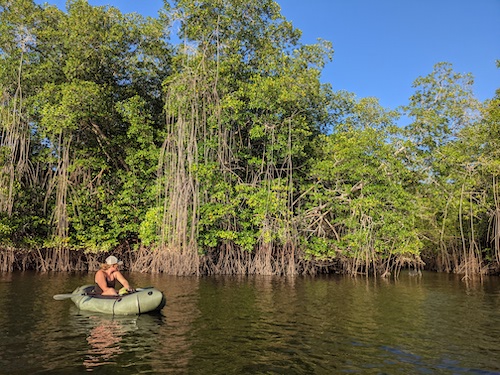 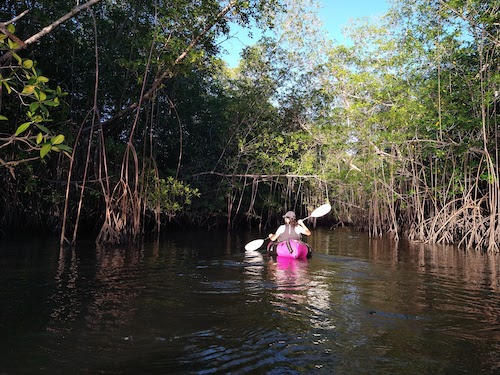 Me entering the creek 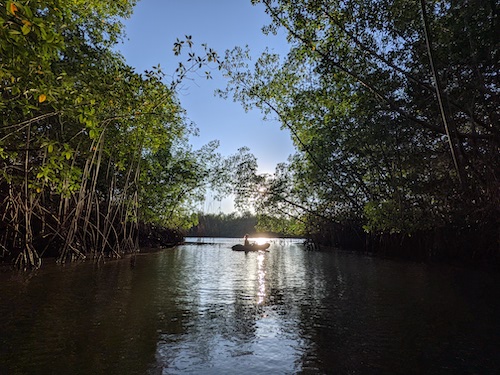 Kelly in the entrance of the creek 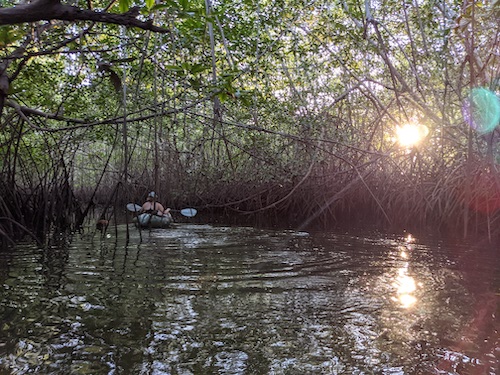 Kelly paddling in the creek

As we paddled the creek the air was super warm and stagnant, as the mangrove forest all around us was too dense to allow the air to move much at all. There were also tiny crabs weaving in and out of sight among the roots, which was a smidge eerie! We weaved between roots hanging from branches overhead until eventually they became too dense to be worth pushing forward, so we turned around. 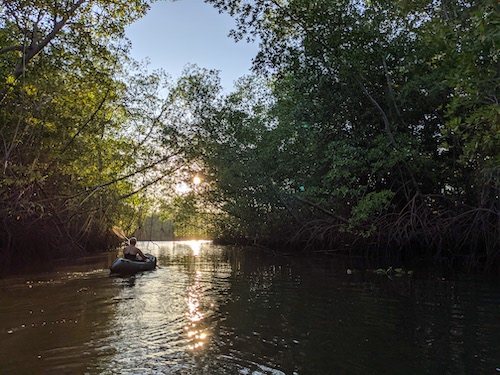 After getting back to the main channel, we really wanted to get to the branch for the creek we'd originally been shooting for, if not paddle inside it for a bit, and we still had maybe an hour before dark, so we went for it! 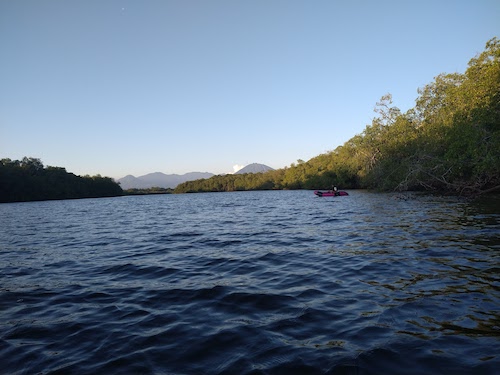 We paddled with a couple volcanoes looming overhead 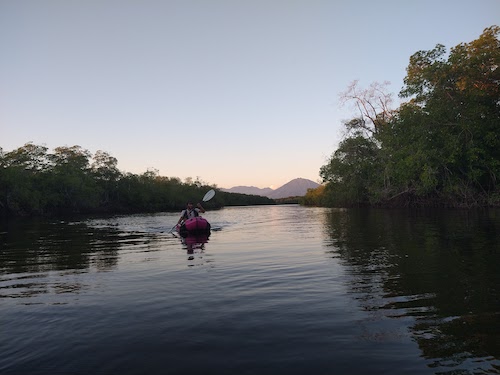 We made it a little ways into our original plan, then figured it was getting awful close to dark, so we took a quick selfie to commemorate the occasion, then started making our way back. We'd seen warning signs for alligators, but never did see any, even though we kept our eyes peeled! We did, however, see tons of wild trees. The mangrove trees have normal looking trunks, that just split into thin roots several feet above the water level, then plunge under the water. They look SO weird. 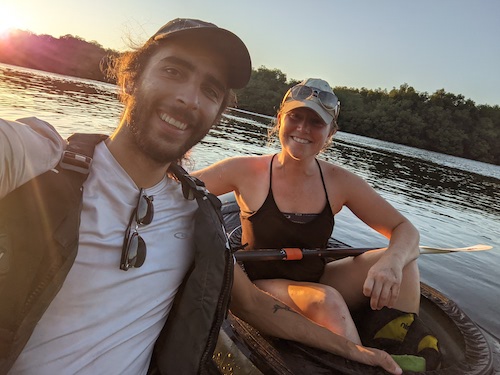 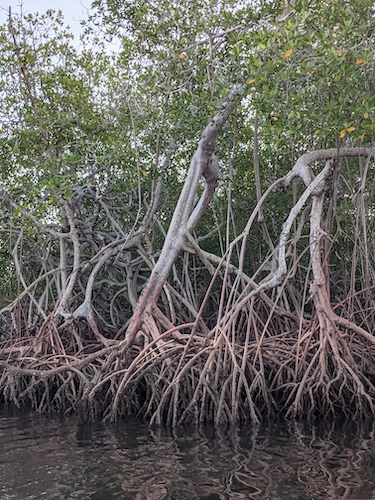 It turns out we were wrong about the current, it was pushing us out, so we had a bit of a rough time heading back, but we made it in the end! We took our rafts out, lay them in the grass next to the restaurant for the place we were staying, then headed straight into the restaurant for some food, since they closed in about 45 minutes. After ordering I went and rinsed off the boats so we would have that much less to do after dinner before bed.

Anyway, we had a nice dinner with some drinks, then walked through the dark forest carrying our rafts back to the room!

Here's a map of our quick raft escapade.

It's Kelly's 30th birthday today! What better way to celebrate than crossing a land border, right? We got up in time to get our free breakfast first thing, put away the rafts that we had left to dry through the night, then got out of dodge for Honduras! On our way, close to the border, we came across a herd of cows using the road as well, which was a very interesting experience to watch tons of cows poke past us on the road like a river. 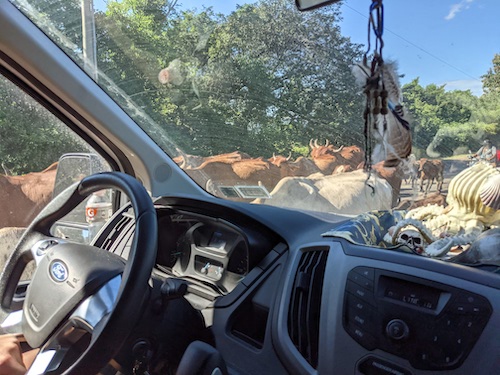 The river of cows

Several miles before the actual border, we came across a huge line of 18-wheelers in line on the shoulder. We passed them by until we came to a checkpoint where a man in a blue polo beckoned us to pull over, asked for our paperwork and pretty much dealt with everything on the El Salvador side. We later learned he was a fixer; a person who facilitates border crossings for tips. They can range from just being helpful for tips to wringing you dry of cash and making up complications! He seemed nice though, and his polo had the name of the border, so we thought he worked for the government. He got us through customs to get Savannah's import permit for El Salvador taken care of, through Immigration to get our passports taken care of, then led us over the bridge to the Honduras side! 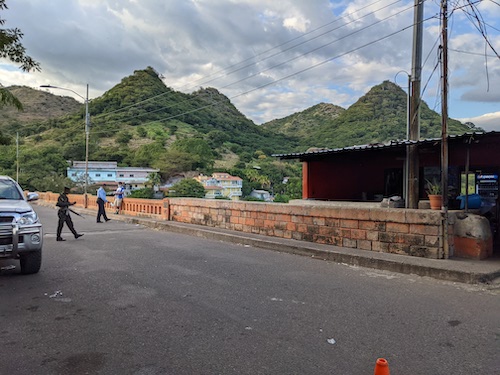 And so, we came to the honduras, where our border crossing experience of the day became a lot more complicated. More in the next post!

We drove through El Salvador in just four days, accidentally stayed in a love hotel, ate at a dinosaur themed restaurant, and packrafted in a mangrove forest!