I write this from a resort-y hostel we're camping at overlooking a lagoon in Nicaragua. A lot to catch up on!

And so the border crossing saga continues! God, what a saga it is. So, the first stop on the Honduras side was a Covid booth where we got our temperatures taken and showed off our fancy dancy vaccination status while the fixer in the blue shirt went to the immigration building to get Savannah's import permit started. As soon as we came out, a random tall, skinny dude in a baseball cap and a cop told us we'd need the original title to get the import permit, and they were very concerned that we didn't have the original, only copies. The skinny guy eventually led us to where we could park just behind the immigration building and so it began. This whole experience was like a fever dream, so I don't think I'm equipped to tell it chronologically, but I'll do my best.

After parking, the skinny guy showed us to the immigration building and we got our passports stamped. After that we talked with the guy in the blue shirt and the skinny guy together (they didn't seem to be affiliated, and the skinny guy was pretty pushy), and they told us to hang out in the van until they and an inspector came to check it out. We waited for about a half hour before they finally came out, then they went back in and we were told to wait a while longer. The two fixers finally came back and apparently we had to pay $150 to bribe three people so we could get in without having the original title! Badass, unscammable Kelly immediately emerged and she engaged in an argument with them about what bullshit that was. In the end we only payed $50 for the permit (which should have only cost the administrative fee of $14), and cruised away with our import permit and a newfound loss of faith in humanity, but mostly a loss of faith in fixers.

It was starting to get dark, so we drove through the dusk to a camp spot we found on iOverlander that was basically a pullover on the side of a backroad people use to access hot springs where no one will yell at us for parking at overnight.

We watched a scary movie, had some drinks, then went to sleep. Happy happy birthday, Kelly!

Another fun day of bureaucracy! We got woken up roughly ever half hour starting at 4am by a dog barking, so we got up and at 'em pretty early at around 6 or 7 to roll out. Nicaragua requires a PCR COVID test for everyone entering the country, regardless of vaccination status, so we had to get that taken care of before crossing at Guasaule. We did a bit of research and found a reputable testing site that the border has taken before (we read that some people have had issues with border agents rejecting tests from certain places). That process went seamlessly, then we headed for the border again!

We came across the now familiar long line of trucks at the border, but this time there was no shoulder for them, so they were just stopped in the one lane we had. We stopped to take stock of the situation, a car behind us honked, then drove into the incoming traffic lane and sped ahead. We figured that was the norm apparently, so we followed suit. Whenever a car was encountered, we would just pull over and let them pass, then keep on driving in oncoming traffic! Wild. 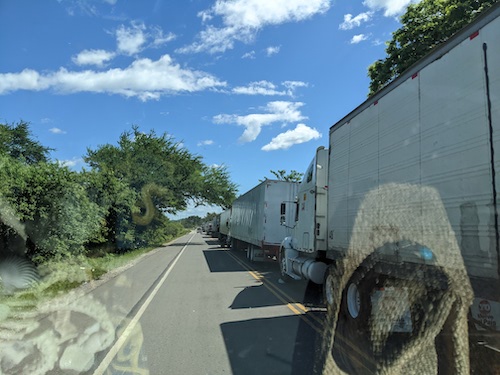 The line of trucks as we drove

Soon the two lanes diverged into different roads, but cones kept us from continuing on our side, so we split from the trucks and went on the single lane road of incoming traffic (no cars, thank god), and pulled up next to a building with three busses worth of people milling around the doors. Immediately three fixers approached us, but I dispelled them with a "No necessitamos ajuda." They just instantly turned around and left. A neat trick! A little boy stuck around though, and showed us where to go. We got our exit stamps, then went around to the other side of the building to cancel our import permit. Good to go! We hopped back in Savannah, then kept on in incoming traffic briefly before rejoining our side of the roa and continuing on to Nicaragua. More in the next post!

We only spent one night and a part of two days here. The border getting in was awful, but the roads through weren't too bad and getting out wasn't the worst!